{{selectedLanguage.Name}}
Sign In Sign out
Action History
×
Home/ Artists / Realism .../ Edouard Manet/ The Execution of the Emperor Maximilian of Mexico 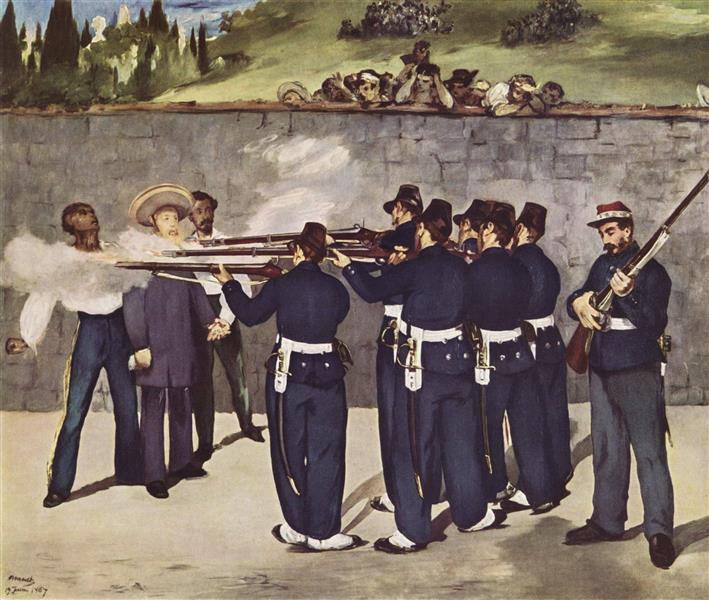 The Execution of the Emperor Maximilian of Mexico

The Execution of Emperor Maximilian is a series of paintings by Édouard Manet from 1867 to 1869, depicting the execution by firing squad of Emperor Maximilian I of the short-lived Second Mexican Empire. Manet produced three large oil paintings, a smaller oil sketch and a lithograph of the same subject. All five works were brought together for an exhibition in London and Mannheim in 1992–93, and at the Museum of Modern Art in New York in 2006.

Maximilian was born in 1832, the son of Archduke Franz Karl of Austria and Princess Sophie of Bavaria. After a career in the Austrian Navy, he was encouraged by Napoleon III to become Emperor of Mexico following the French intervention in Mexico. Maximilian arrived in Mexico in May 1864. He faced significant opposition from forces loyal to the deposed president Benito Juárez throughout his reign, and the Empire collapsed after Napoleon withdrew French troops in 1866. Maximilian was captured in May 1867, sentenced to death at a court martial, and executed with Generals Miguel Miramón and Tomás Mejía on 19 June 1867.

Manet supported the Republican cause, but nonetheless was inspired to start work on a painting heavily influenced by Goya's The Third of May 1808. The final work, painted in 1868–69 is now held by the Kunsthalle Mannheim. The painting is signed by Manet in the lower left corner but bears the date of Maximilian's execution in 1867 despite being painted in 1868–69.

Fragments of an earlier and larger painting from about 1867–68 are held by the National Gallery in London. Parts of this work were probably cut off by Manet, but it was largely complete on his death; other parts were sold separately after his death. The surviving pieces were reassembled by Edgar Degas and they were bought by the National Gallery in 1918, but then separated again until 1979 and finally combined on one canvas in 1992.

A third, unfinished oil painting is held by the Museum of Fine Arts, Boston, donated from Mr. and Mrs. Frank Gair Macomber in 1930, who bought it from Ambroise Vollard in 1909. A much smaller work in oils, a study for the Mannheim painting, is held by the Ny Carlsberg Glyptotek in Copenhagen. Manet was refused permission to reproduce the lithograph in 1869, but an edition of 50 impressions was produced in 1884, after his death. Examples of the lithograph are held by the Metropolitan Museum of Art in New York and the Clark Art Institute in Williamstown, Massachusetts.

In the Boston version of the painting, the soldiers wear clothes and sombrero of Mexican Republicans. In the final version in Mannheim, they are dressed in 19th century field dress, common to many armies at that time, but Manet recognized the irony that they could be easily mistaken for French soldiers in this picture. The sergeant wearing a red cap clearly resembles Napoleon III (in reality, the execution was bungled, and a Coup de grâce was required).