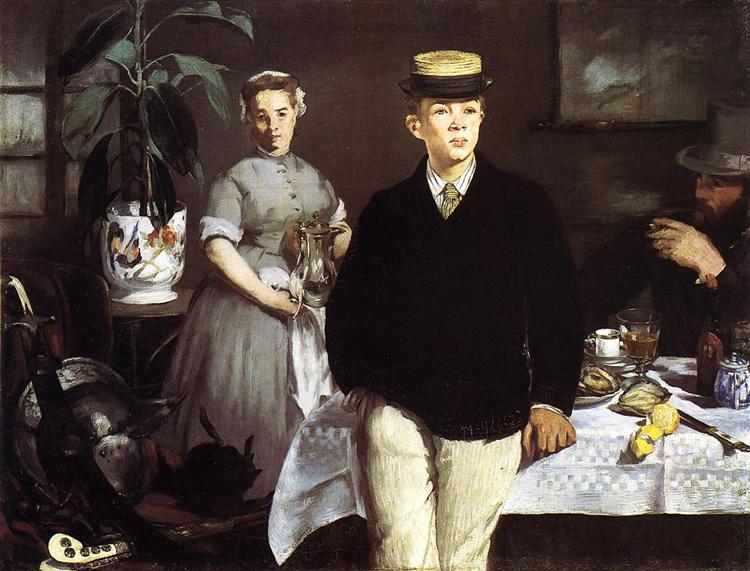 Luncheon in the Studio

Luncheon in the Studio (or The Luncheon) is an 1868 oil painting by Édouard Manet. Partially a portrait of 16-year-old Léon Leenhoff — the son of Suzanne Leenhoff before her 1863 marriage to Manet, and possibly the son of Manet or Manet's father Auguste — it is also an enigmatic work that has received limited attention within Manet's oeuvre. Critic Nan Stalnaker notes that "despite continued questions about its meaning, the work is acknowledged to be brilliantly painted and a major Manet work".

In the summer of 1868 Manet traveled to Boulogne-sur-Mer for his summer vacation, where he painted Luncheon in the Studio and other works. Luncheon was posed in the dining room of Manet's rented house.

Leenhoff is the focus of the painting, with his back to the other two people, who have at various points been identified as his mother and Manet. These identifications are now seen as incorrect; the man seated at the table, smoking a cigar and enjoying a coffee and a digestif, is anonymous—although he bears a resemblance to Manet (his friend, the painter Auguste Rousselin has also been suggested). The woman gazing toward the viewer is a servant. Given the uncertain status of Leenhoff's paternity, Meyers proposes that the two figures may nevertheless represent Suzanne and Édouard symbolically, specifically "their belated recognition and acceptance of Auguste [Manet]'s son".

In an otherwise muted color scheme, the yellow in Leenhoff's tie, pants, and straw hat connect with the lemon on the table. The armour that appears incongruently in the bottom-left corner recalls its symbolism and collectibility before and during the Second Empire, when it was also the subject of still lifes. The table holds more conventional subjects of the genre, including a peeled lemon, oysters, a Delft sugar bowl, and a knife that protrudes off the table. In this way Manet represents both the "romantic" and "naturalistic" modes of his art, according to Collins, who also notes, given the presence of the man in the background, that smoking was popular among "young romantics".

The painting was exhibited in the 1869 Paris Salon along with Manet's The Balcony, another work that lacked a simple genre affiliation, and in which at least one of the figures seems to confront the viewer as if challenging the "fourth wall". Both pieces were found wanting by art critics of the day; by this time a common criticism of Manet was that his goal was to "attract attention at any price". The reviewer Jules-Antoine Castagnary criticized the two paintings in a quote that well reflects the conventional expectations of a painting in this period, just before the further turbulence that Impressionism brought upon art:

Another critic, Marius Chaumelin, echoed this sentiment (speaking of both paintings): "The personages... are not at all handsome [except for the seated woman in The Balcony, Berthe Morisot], their faces having something morose and disagreeable about them, like the faces of persons who pose, and in fact all these figures have the air of saying to us: Look at me!... Thus, no expression, no feeling, no composition." He spoke of "types without character, scenes devoid of all interest" and said disparagingly (yet insightfully from the point of view of modern criticism) that "Manet had made the portrait of a Balcony and a Luncheon".