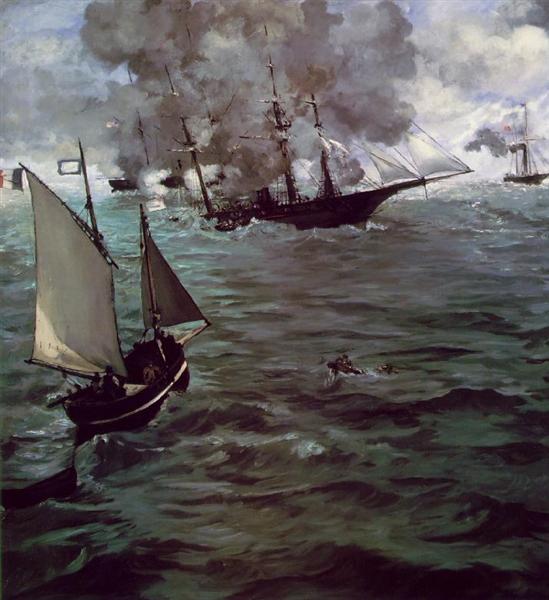 Battle of Kearsage and Alabama

The Battle of the Kearsarge and the Alabama is an 1864 oil painting by Édouard Manet. The painting commemorates the Battle of Cherbourg of 1864, a naval engagement between the Union cruiser USS Kearsarge and the Confederate raider CSS Alabama. Many spectators were able to see the battle from the coast of France and saw that the USS Kearsarge sank the CSS Alabama. Not having witnessed the battle himself, Manet relied on press descriptions of the fight to document his work. Within one month of this battle, Manet had already completed this painting and got it on display in the print shop of Alfred Cadart in Paris.

In 1872, Barbey d'Aurevilly stated that the painting was a "magnificiant marine painting" and that "the sea ... is more frightening than the battle". It was hung at Alfred Cadart's and was praised by the critic Philippe Burty.

The painting was acquired by the French art collecter Marguerite Charpentier in 1878 and is now in the Philadelphia Museum of Art.