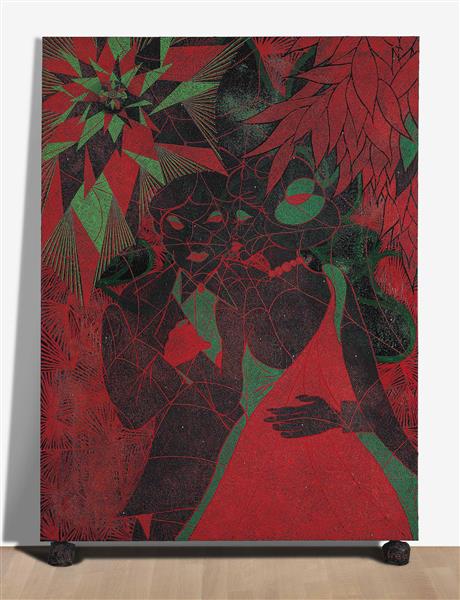 Afro Red Web (2002-2003) was one of five paintings made for Within Reach, the exhibition inside the British Pavilion at the 50th Venice Biennale in 2003. The exhibition that featured Ofili's works was created in collaboration with the Ghanaian British architect David Adjaye. Initially inspired by the Caribbean islands (Puerto Rico, Grenada, and especially Trinidad), the series of paintings represents a vision of paradise.

Along with the paintings, the installation featured Union Black (2003): the Union Jack flag, where the traditional colors (blue, white, and red) are replaced with red, black, and green. Ofili also used this palette for the paintings in the exhibition. The colors of Ofili's flag relate to Marcus Garvey's Pan African U.N.I.A banner from the 1920s, and the idea of African American and Afro-Caribbean communities returning to Africa to form a modern Pan-African national community. This unfulfilled aspiration was addressed by an African-American artist, David Hammons in African-American Flag (1990), and Ofili's Union Black builds on this concept. In this way, Ofili marked his paradise - an imaginary kingdom that represents his British identity and African ancestry. While he was inspired by the Pan-African political movement and the 1960s cultural movement 'Black is Beautiful,' he was more interested in recapturing their mood and spirit rather than their political activity.

Across five paintings of Within Reach series, Ofili depicts an Afro couple in different stages of paradise. However, this paradise is not cloudless. In Afro Red Web, the threat is articulated in the form of a red web. Ofili explained that he imagined a fly caught in a net and the risk of an approaching spider. The lush scenery and rich foliage prompt associations to the biblical Garden of Eden; however, Ofili turns the story on its head by reversing the roles. Here, the woman seems to be passive and oblivious, while the man is either part of the web or the predator. The sensuous woman somewhat innocently kisses the man on the cheek, unaware of his blazing red eyes and the dagger clenched in his fist. The painting, dominated by a bold red, was presented in a green room. In an adjacent red room, the painting Afro Jezebel (2002-2003) served as its counterpart. The woman's kiss also references the Garden of Gethsemane, and the betrayal of Jesus by his disciple Judas Iscariot. It's clarified in Afro Jezebel: the man is engrossed in the embrace, while the woman still maintains a double vision, simultaneously looking out and looking at him.

The composition in Afro Red Web is formed from geometric patterns, which all seem to branch out from the woman's kiss. Ofili used his unique form of pointillism, forming perfect tiny dots, over which he layered multiple coats of resin lacquer. The black elements of the composition have two tones, glossy and matt, adding to the textural and tactile quality of the painting. The radiating sun or star in the upper left corner is made out of elephant dung, a signature in Ofili's art. Like in other paintings, he also used lumps of elephant dung to prop up the artwork.