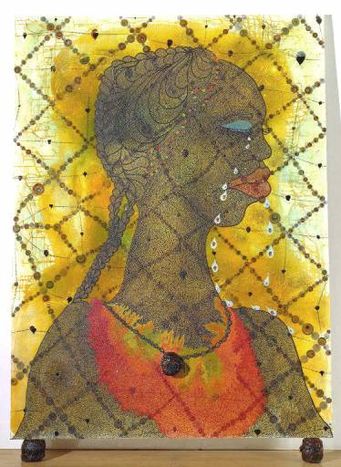 No Woman No Cry

The painting No Woman No Cry (1998) is a tribute to Stephen Lawrence, a black teenager who was murdered in a racially motivated attack in East London in 1993. A 1998 public inquiry into the Metropolitan Police Service concluded that their handling of the case was severely impaired by professional incompetence and institutional racism. The woman in Ofili’s painting is Doreen Lawrence, the mother of Stephen Lawrence. She, for five years, fiercely campaigned for a public inquiry that ultimately resulted in an overhaul of Britain’s race relations legislation.

Ofili began working on No Woman No Cry by painting multiple layers of luminous shades of pale green and bright yellow. He then created a crisscross of sequences of circles that form rough diamond shapes, made from cutouts of reproductions of artworks by British abstract artist, Bridget Riley. Cutting across these are horizontal dotted lines broken up by small hearts, which are strategically placed in the middle of the diamond shapes. In the background, Ofili wrote ‘RIP Stephen Lawrence 1974-1993’, which is faintly seen underneath the top layers of the painting. Because Ofili used fluorescent paint, the written text is particularly visible under ultraviolet lighting. The woman wears a thin black necklace with a pendant made from a lump of elephant dung that is filled with map pins. Ofili also placed two large lumps of elephant dung on the floor to hold up the painting that leans on the wall. The artist titled the painting No Woman No Cry, after the 1974 song by legendary reggae musician Bob Marley. The title offers comfort and solace to the female figure, whose pale blue tears flow - each tear has a small photograph of Stephen Lawrence in its center.

From 1996, Ofili made a shift from painting mainly abstract works to focusing on portraits of large individual figures. No Woman No Cry shares several traits with other paintings from the period. For instance, the use of mixed media, such as beads, map pins, collage, and elephant dung, is recurring in other works: The Holy Virgin Mary (1996), Dream (1998), and Third Eye Vision (1999). Also, while many of Ofili’s works are purposefully garish, ironic, and humorous, like Double Captain Shit and the Legend of the Black Stars (1997) and Pimpin’ ain't easy (1997), No Woman No Cry strikes a very different tone. The artist was deeply moved by Doreen Lawrence’s overwhelming grief and dignified stance - with each interview, she grew stronger and became more emboldened. This admiration and respect come through in a very tender and noble portrait. While the painting refers to a specific incident, it can also be understood as a universal portrayal of melancholy and grief.

In 1999, the painting was purchased by the Tate Museum in London. Because of the variety of materials applied, particularly the elephant dung, it is hard to predict how it will endure daily museum conditions in the long term. For this reason, the painting is closely monitored. It is likely that at some point, the elephant dung will fall off. However, there are instructions on how it should be replaced and remade from elephant dung at the London Zoo.