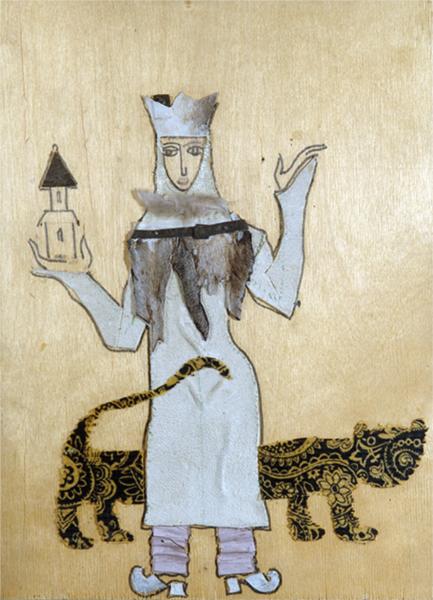 The sketch to the movie "Colour of Pomegranate". "Qween", 1967 - Sergei Parajanov

The term Soviet Nonconformist Art refers to art produced in the former Soviet Union from 1953 to 1986 (after the death of Joseph Stalin until the advent of Perestroika and Glasnost) outside of the rubric of Socialist Realism. Other terms used to refer to this phenomenon are "unofficial art" or "underground art."

From the time of the Bolshevik Revolution in 1917 until 1932, the historical Russian avant-garde flourished and strove to appeal to the proletariat. However, in 1932 Stalin's government took control of the arts with the publication of "On the Reconstruction of Literary-Artistic Organizations"; a decree that put artists' unions under the control of the Communist Party. Two years later, Stalin instituted a policy that unified aesthetic and ideological objectives, which was called Socialist Realism, broadly defined as art that was, "socialist in content and realist in form." Moreover, the new policy defined four categories of unacceptable art: political art, religious art, erotic art, and "formalistic" art, which included abstraction, expressionism, and conceptual art. Beginning in 1936, avant-garde artists who were unable or unwilling to adapt to the new policy were forced out of their positions, and often either murdered or sent to the gulag, as part of Stalin's Great Purges. Vladimir Sterligov, a student of Kazimir Malevich, along with two of his own students, Alexander Baturin and Oleg Kartashov, as well as Vera Ermolaeva and her students Marusya Kazanskaya and Pavel Basmanov were arrested in December, 1934 and taken by train to Kazakhstan. Sterligov spent five years in prison outside Karaganda, while Ermolaeva disappeared forever. Sterligov's student, Alexander Baturin, spent a total of 32 years in prison.

In the wake of World War II, referred to in Russia as The Great Patriotic War, Party resolutions were passed in 1946 and 1948, by Andrei Zhdanov, chief of the Propaganda Administration formally denouncing Western cultural influences at the start of the Cold War. Art students such as Ülo Sooster, an Estonian who later became important to the Moscow nonconformist movement, were sent to Siberian prison camps. The nonconformist artist Boris Sveshnikov also spent time in a Soviet labor camp. Oleg Tselkov was expelled from art school for 'formalism' in 1955, which from the viewpoint of the Party might have constituted an act of treason.

The death of Joseph Stalin in 1953, and Nikita Khrushchev's subsequent denunciation of his rule during his Secret Speech at the Twentieth Party Congress in 1956 created a "thaw"; a liberal atmosphere wherein artists had more freedom to create nonsanctioned work without fearing repercussions. Furthermore, Stalin's cult of personality was recognized as detrimental, and within weeks many paintings and busts bearing his likeness were removed from public places. Artists such as Aleksandr Gerasimov, who had made their careers painting idealized portraits of Stalin, were forced out of their official positions, as they had become embarrassing to the new leadership. However, despite increased tolerance, the parameters of Socialist Realism still hadn't changed, and therefore, artists still had to tread lightly.

The "thaw" era ended quickly, when in 1962, Khrushchev attended the public Manezh exhibition at which several nonconformist artists were exhibiting, including Ulo Sooster with his Eye in the Egg. Khrushchev got into a public and now-famous argument with Ernst Neizvestny regarding the function of art in society. However, this altercation had the unintended effect of fomenting unofficial art as a movement. Artists could no longer hold delusions that the state would recognize their art, yet the climate had become friendly and open enough that a coherent organization had formed. Additionally, punishments for unofficial artists became less severe; they were denied admittance to the union instead of being executed.