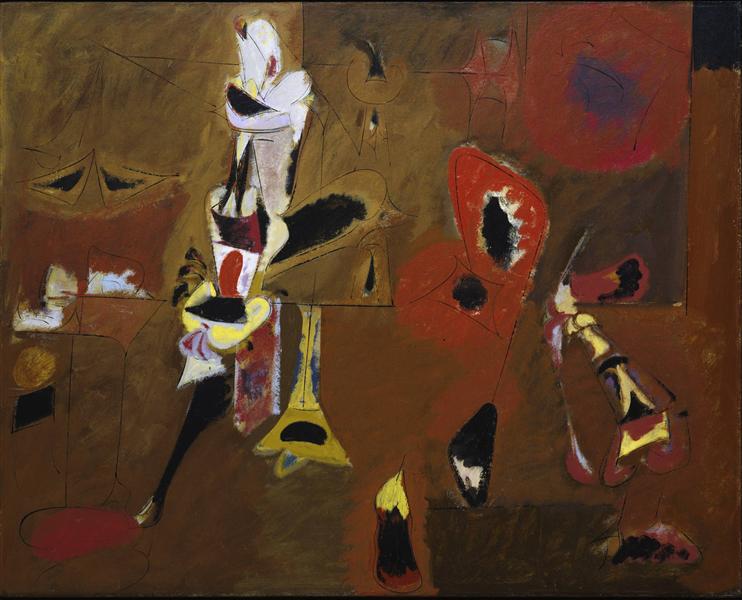 Many art historians have linked Arshile Gorky’s Agony (1947) to the struggles and hardships the artist experienced before committing suicide on July 21st, 1948. Indeed, the personal disasters came one after another: it began in January 1946 with a fire in his studio that led to the destruction of multiple paintings, and a painful cancer operation that happened a month later. During this time, Gorky’s physical and mental state deteriorated. In 1948, he broke his neck and lost the use of his painting arm in a car accident. Soon after, his wife left him taking their two daughters to her mother's home in Virginia. The accumulation of physical and emotional agony ultimately proved too much for Gorky to bear. He hanged himself, having left a note “Goodbye my loved”.

Like the title suggests, Agony is a blazing scene in terms of its color palette and sharp lines. In the dark and dramatic color scheme, browns and maroons dominate the background, while patches of yellow, red, and black form the central motifs. The color scheme plays a pivotal role in expressing the theme of agony, especially when comparing the painting to Gorky’s preparatory sketches. In Study for Agony (ca. 1946-1947), for instance, the scene seems much more erratic than in the final painting. However, in a final version, Gorky preserved the fundamental elements of the composition and the central motifs of the painting.

Agony ignited the imagination of scholars, who looked for symbols and images in Gorky’s abstract forms. Interpretations were mainly connected to the tragic circumstances of the artist's final years. Agony appears to be a furnished interior, with the horizontal line crossing the canvas marking the line of the floor. Gorky’s first biographer, American painter Ethel Schwabacher viewed Agony as a ‘battle of the sexes’. She linked the painting to an earlier set of drawings, Fireplace in Virginia (1946), that showed an interior setting similar to the one in Agony. Fireplace in Virginia could have referred to the home of Gorky’s in-laws in Virginia. What distinguishes the drawing from the painting is the mood: the atmosphere shifts from an air of content and hospitality in Fireplace in Virginia to a spirit of fierce conflict in Agony, which reveals itself in the patches of fiery red.

Others continued this interpretation by associating the forms in the painting with human figures and even specific details from Gorky’s biography. On the lower right side, the shape resembles a figure bowing toward the center of the composition. From the upper right corner, a large disc enters the space, which in some of the sketches bears a face. The most dominant figure at the center arouses gruesome associations of a hanging corpse. In studies of the painting, Gorky paid particular attention to the development of this figure, altering small details and shifting the silhouette. Since Agony was painted before Gorky’s suicide, it is possible that the artist consciously or unconsciously expressed his intentions thoughts through his art.