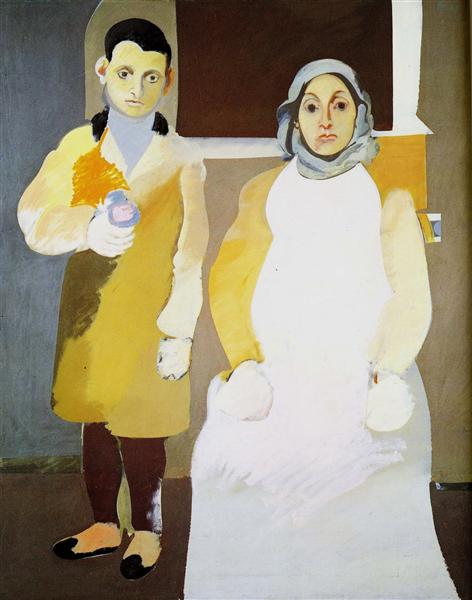 The Artist and His Mother

The Artist and His Mother (1926-1936) represents the pinnacle of Arshile Gorky’s figurative paintings. It is based on a photograph of the painter and his mother, taken in 1912 in his native country Armenia. Only three years later, the Ottoman Empire began the systematic extermination of the Armenian people, known as the Armenian Genocide. Even though Gorky and his family survived a death march, the ordeal caused permanent damage. His mother’s health particularly suffered, and in 1919, she died of malnourishment.

Gorky began working on the double portrait in 1926 and worked toward the final version over the next decade. During this period, Gorky made many preparatory sketches and studies. For example, two quick pen sketches drawn side by side were used to set up the composition and arrangement of the painting. In another pencil sketch, the artist created a detailed study for the painting by using a grid with numbered squares to enlarge the drawing. He also created another version of The Artist and His Mother (ca.1926-1942) in a warmer color palette. Still, this version does not appear to be as sharp and precise in its painterly treatment and finishing touches.

In The Artist and His Mother, Gorky applied and scrapped thin layers to give the surface the soft glow of marble or porcelain. He painted stiff figures in cool and muted colors, blending patches of ochre, blue, green, and brown. The figure of the mother resembles a statue, due to the severe posture and the flat surface of the apron that looks like a smooth piece of marble or stone. In terms of style, The Artist and His Mother was influenced by the works of Pablo Picasso, especially the painting Portrait of Gertrude Stein (1906). In this painting and other portraits, like Portrait of Vartoosh (1936-1937), the artist paid particular attention to the eyes. For Gorky, expressive eyes were characteristic Armenian features. As a child, he might have seen in his native village medieval religious paintings and manuscripts that highlighted these features. Later, while visiting American museums, Gorky discovered Russian icons, and the large eyes in Sumerian and Hittite art, which he associated with his ancestry in the Caucuses.

The horrible events that shaped Gorky’s early life and the traumatic loss of his mother come across in The Artist and His Mother. When painting the scene, Gorky chose to leave parts unfinished. By erasing the two hands of his mother, he injected a sense of violence into the painting. The figures in Gorky’s art, especially his mother, seem to disintegrate in the same way that memories become more elusive with time. Gorky transformed the old photograph into introspection on his mind: on the canvas, he reconstructed the complex emotional response to the photograph. The statue-like figure of the mother, the hollow eyes, and the numb expression make her seem almost ghost-like. In comparison, the figure of the young boy has three dimensions and a distinctly sad expression. For Gorky, the painting was an expression of personal loss, and for many others, it became a symbol of the tragedy of the Armenian Genocide.