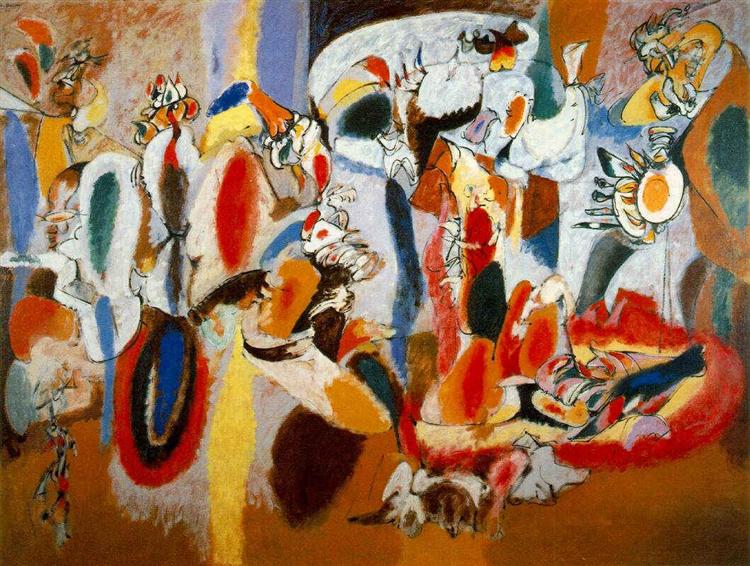 The Liver is the Cock's Comb

The Liver is the Cock’s Comb (1944) is one of Arshile Gorky’s largest and most noteworthy paintings. It combined several influences that marked the emergence of Gorky’s mature original style. The artist blended elements of Cubism and Surrealism, specifically from the paintings of Pablo Picasso and Joan Miró. Additionally, the color range in The Liver is the Cock’s Comb can be connected to the works of Russian artist Wassily Kandinsky, much admired by Gorky. Another prominent figure that helped in Gorky’s artistic development was Chilean surrealist painter Roberto Matta. He advised Gorky to thin his paints with turpentine, which allowed the colors to run, smudge, and drip, acquiring a translucent quality. It made the colors in The Liver is the Cock’s Comb more vibrant and sensuous than in earlier works, such as The Garden in Sochi (1943).

Gorky was inspired by nature, his physical surroundings, as well as by memories of his father’s garden in Armenia. The artist aimed to present complexities and contradictions of his life, and so the painting and its title hold multiple layers of meaning. The peculiar title was the result of Gorky’s collaboration with the surrealist André Breton on New Year’s Eve 1944. Breton, the author of the Surrealist Manifesto, praised the artwork, stating it was one of the most famous paintings produced in America. On a superficial level, some shapes resemble livers floating in space, while other crown-like forms are similar to a cock’s combs. However, some have suggested that these shapes were products of the artist’s imagination, and as such, they did not represent any particular object found in nature.

Furthermore, scholars have offered other explanations that give the title a range of meanings. The liver was considered the ancient organ of love, and the phrase cock’s comb can be interpreted as a sexual pun. In this case, the title could mean that love is lust, making the painting a representation of passion and desire. Therefore, the shapes can signify biological organisms or human reproductive organs freely floating in space. Another possibility is that the pun cock’s comb refers to conceit or vanity. If the word liver is understood as the one who lives, the title could be a statement: one who is actively alive already engaged in the greatest of vanities.

The painting was based on a drawing done the previous year, Study for The Liver is the Cock’s Comb (1943). It was not uncommon: before creating oil paintings, Gorky usually made several preparatory sketches and studies. In this way, he established the foundations of the painting in terms of color and composition. Still, when working with oil paint, Gorky improvised in some sections by changing color areas or adding new shapes. Overall, Gorky preserved the graphic style seen in the drawing but accentuated the contours and colors, which resulted in a fantastical and mysterious landscape.