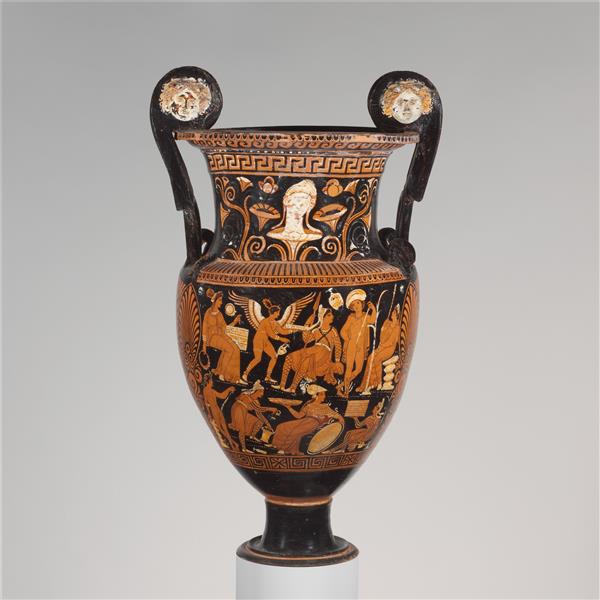 Obverse: the Judgment of Paris. The Trojan prince is seated in the center, dressed in Eastern garb. He listens to Hermes, standing to his right, who has brought the three goddesses to him to be judged. Aphrodite, accompanied by Eros is in the upper left, seated beside a large box, holding a wreath and a mirror. Hera, holding her scepter is seated in the upper right on a rock. Athena, directly below Paris, is also seated, leaning on her shield, wearing her helmet and holding a large phiale. Athena is attended by two youths, who, like Paris, are in Eastern costume. In the same register, at the extreme left, a young Pan, leaning on a rock, observes the scene. On the neck: frontal head of a woman wearing a Phrygian cap emerging from a blossom, surrounded by flowers and tendrils. On the handles, in relief, heads of Io with blonde hair.

Reverse: naiskos with a statue of the deceased woman holding a wreath, a long sash, and a flower. Around the naiskos four mourners. Above, on either side is a seated youth holding a box; the one on the left also holds grapes. The other, a situla. Below, also arranged symetrically, a woman approaches on eighter side, holding a mirror and an oinochoe. On the handles in relief, heads of Io with black hair.

Attributed to the Baltimore Painter