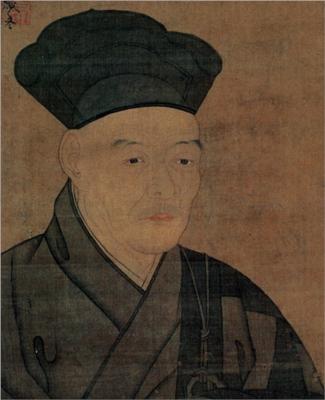 Sesshū Tōyō (Japanese: 雪舟 等楊; Oda Tōyō since 1431, also known as Tōyō, Unkoku, or Bikeisai;1420 – 26 August 1506) was the most prominent Japanese master of ink and wash painting from the middle Muromachi period. He was born into the samurai Oda family (小田家), then brought up and educated to become a Rinzai Zen Buddhist priest. However, early in life he displayed a talent for visual arts, and eventually became one of the greatest Japanese artists of his time, widely revered throughout Japan and China.

Sesshū studied under Tenshō Shūbun and was influenced by Chinese Song dynasty landscape painting. In 1468–69, he undertook a voyage to Ming China, where too he was quickly recognized as an outstanding painter. Upon returning to Japan, Sesshū built himself a studio and established a large following, painters that are now referred to as the Unkoku-rin school—or "School of Sesshū". Although many paintings survive that bear Sesshū's signature or seal, only a few can be securely attributed to him. His most well-known work is the so-called "Long Landscape Scroll" (山水長巻, Sansui chōkan).

Sesshū was born in Akahama, a settlement in Bitchū Province, which is now part of western Okayama Prefecture. His family name was Oda, but his original name is unknown. He received the name Tōyō in 1431, when he was enrolled at the Hōfuku-ji, a Zen temple in Sōja. Kanō Einō's History of Japanese Painting (Honchogashi), a 17th-century source, contains a well-known anecdote about the young Sesshū: apparently the future painter did not study Zen with enough dedication, preferring instead to spend his time drawing. Once, he was punished for disobedience and tied to a pillar in the hall of the temple. After a while, a priest came to see him and jumped up with surprise—there was a mouse very close to Sesshū's foot. However, it was actually a picture which Sesshū had painted with his tears. Although the story is famous, its authenticity is questionable. At any rate, during his early studies Sesshū would have received instruction not only in religion, but also calligraphy and painting.

Around 1440 Sesshū left Bitchū for Kyoto, a large city which was then the capital of Japan. He lived as a monk at Shōkoku-ji, a famous Zen temple. There, Sesshū studied Zen under Shunrin Suto (春林周藤), a famous Zen master, and painting under Tenshō Shūbun, the most highly regarded Japanese painter of the time. Shūbun's style, like that of most Japanese Zen painters, was inspired by Chinese Song dynasty painters such as Ma Yuan, Xia Gui, Guo Xi, and others. There are no surviving works by Sesshū from this period, but even his late work shows similar influences. Sesshū spent some 20 years in Kyoto, and then left for Yamaguchi Prefecture to become chief priest of Unkoku temple. It was around this time that he started calling himself Sesshū ("snow boat").

Yamaguchi was where many Japanese expeditions to China started, and perhaps Sesshū's choice of the city was dictated by a wish to visit that country. He secured an invitation from Ōuchi clan, the lords of Yamaguchi and one of the most powerful families in Japan, and joined a trading trip; in 1468 he landed in Southern China. His duties were to buy Chinese works of art for wealthy Japanese patrons, and to visit and study at Chinese Zen temples. Although the artist himself was disappointed in the art of Ming dynasty, which deviated very far from Song models, he was very taken with Chinese nature and temples. He was quickly recognized as an important painter, and a contemporary source indicates that he may have received a commission from the Imperial Palace at Beijing. Whether this is true, or whether he accepted is unknown; the best surviving works of the period are four landscape scrolls currently in the collection of Tokyo National Museum.