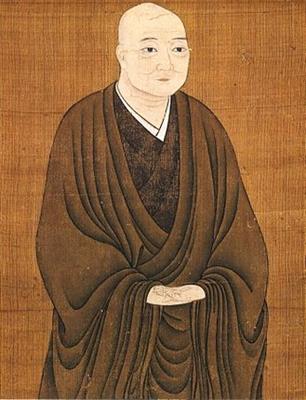 Kanō Motonobu (狩野 元信, August 28, 1476 – November 5, 1559) was a Japanese painter. He was a member of the Kanō school of painting. Through his political connections, patronage, organization, and influence he was able to make the Kano school into what it is today. The system was responsible for the training of a great majority of painters throughout the Edo period (1615–1868). After his death, he was referred to as Kohōgen (古法眼).

Kanō Motonobu (狩野 元信, August 28, 1476 – November 5, 1559) was a Japanese painter. He was a member of the Kanō school of painting. Through his political connections, patronage, organization, and influence he was able to make the Kanō school into what it is today. The system was responsible for the training of a great majority of painters throughout the Edo period (1603–1868). After his death, he was referred to as Kohōgen (古法眼).

The Kanō family are presumed to be the descendants from a line of warriors from the Kanō district. The Kanō district is now called Shizuoka Prefecture. The forebear of this family was Kanō Kagenobu. He seems to have been a retainer of the Imagawa family. It has been reported that he painted a picture of Mount Fuji for a visit to the shōgun Ashikaga Yoshinori in 1432. The Kanō family dominated the painting world from the end of the Muromachi period (1336–1573) to the end of the Edo period (1603–1868).

Since Kanō Motonobu was son and heir of the founder of the Kanō School, Kanō Masanobu, he was likely trained in Kanga (Chinese-style ink painting) by his father. Right away Motonobu showed great promise as an artist and procured several commissions from major patrons as early as nine years old. Such patrons include the Ashikaga shogunate, members of the imperial aristocracy, Kyoto merchant class, and major Kyoto shrines and temples.

One of his earliest documented contracts was for a set of votive plaques (e-ma) depicting for the Thirty-six Poetry Immortals for the Shinto shrine of Itsukushima. It was commissioned by a group of Sakai merchants in 1515 and the pieces are now located in Hiroshima Prefecture.

By the 1530s Motonobu had married the daughter of the head of the Tosa School of painting, Tosa Mitsunobu, had three sons (Shōei [1519–1592], Yusetsu [1514–1562], and Joshin), and lead a small Kanō sect in northern Kyoto. The workshop contains roughly ten people containing Motonobu, his three sons, Motonobu’s younger brother Yukinobu (1513–1575), and some assistants that might have not been blood related. Since Motonobu was the head or chief architect of these paintings he took on the contracting, production, and organization of the projects while still being very involved with the marketing of his work and his studio. Known for his charm and intellect, Motonobu became a fierce businessman, and frequently petitioned to the shogun for a vast amount of varied commissions with his fellow merchant, Hasuike Hideaki.

However, the time he spent marketing did not deter him from his paintings. As head of the Kanō school, he took the most important rooms in a building commissioned, and then assigned his son and assistants other projects based on hierarchy. These projects could be painting their own rooms independently or grinding pigments, preparing the paper, painting the background color, or simply filled in large areas of color. As a result of Motonobu's marketing skills, the commissions grew allowing the workshop and school itself to expand. Motonobu trained his workshop which was full of members of his family and other apprentices to execute his many designs. The workshop trained other artists by watching the master painter work and emphasised recreating their master's style.