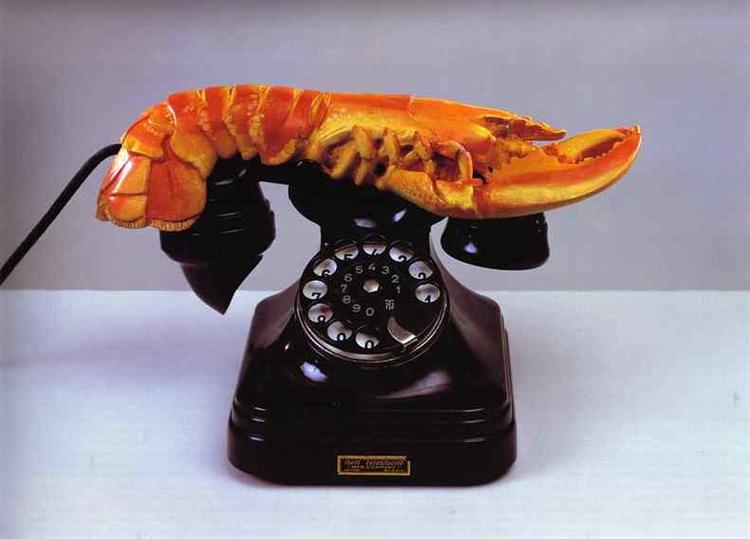 Lobster Telephone (1936) is a surrealist object, in which the artist combined items that are usually not associated with one another. The result is a strange new object, that is both humorous and threatening. For Dalí, these strange combinations revealed the hidden desires of the unconscious. Dalí was greatly influenced by the theories of Sigmund Freud: concepts of dreams, childhood memories, castration anxiety, and incestuous desires all played significant roles in his art. With the help of Freudian thought, Dalí developed a unique visual language, through which he could express his personal fears and obsessions.

Telephones and lobsters were recurring motifs in Dalí’s art. The telephone appears in many of Dalí’s paintings from the 1930s, and it is usually accompanied by a food item: telephone and fish in Mountain Lake (1938), telephone and fried eggs in The Sublime Moment (1938) and telephone and oysters in The Enigma of Hitler (1939). In Lobster Telephone that was initially called Aphrodisiac Telephone, Dalí made a strong analogy between food and sex: the lobster is placed in such a way that its sexual organs cover the mouthpiece of the telephone. Lobsters along with food like oysters, caviar, and truffles were generally considered an aphrodisiac. However, the lobster can also be seen as menacing: according to one interpretation, the lobster with its small and sharp claws represents a symbolic instrument of castration. In 1939 the artist created a multimedia experience The Dream of Venus for the New York World’s Fair (1939), in which he dressed live nude models in garments made from fresh seafood. Dalí used the lobster to cover the female sex organs of his models, which possibly expressed his personal fears of female sexuality.

Dalí made Lobster Telephone for Edward James, an English poet and leading collector of Surrealist art. This work, which belongs to the Tate Museum collection, is one of four models Dalí created for James. For the Tate version, Dalí used a telephone made by the Bell Company in Antwerp, Belgium, and a Siemens handset made in London. He made an additional series of six lobster telephones in shades of off-white like Aphrodisiac Telephone (1938) at the Minneapolis Institute of Art.

The idea for the Lobster Telephone traces back to a series of drawings Dalí made for American Weekly in 1935. One of the drawings, New York Dream - Man Finds Lobster in Place of Phone shows a man reaching for the phone and realizing in horror that it is a lobster. In 1938, Dalí contributed an entry called Téléphone Aphrodisiaque to the Dictionnaire abrégé du surréalisme (Abridged Dictionary of Surrealism) with a drawing of a lobster telephone surrounded by flies. A similar drawing was featured in his autobiography The Secret Life of Salvador Dali in which he wrote: “'I do not understand why, when I ask for a grilled lobster in a restaurant, I am never served a cooked telephone; I do not understand why champagne is always chilled and why on the other hand telephones, which are habitually so frightfully warm and disagreeably sticky to the touch, are not also put in silver buckets with crushed ice around them.”