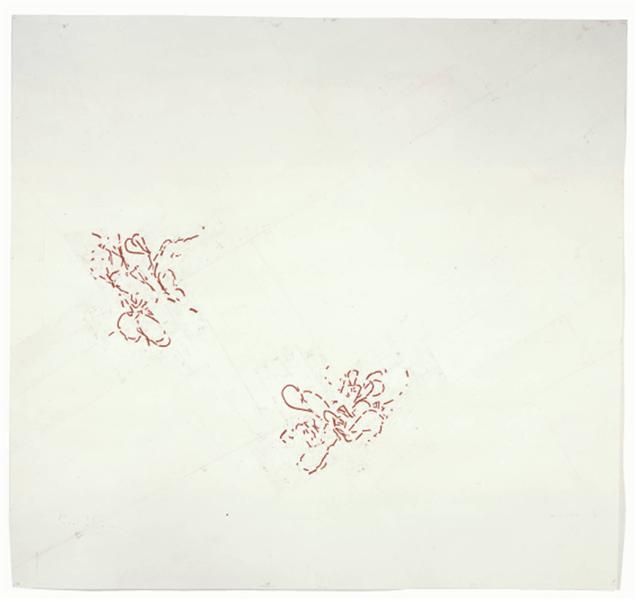 The materiality of objects and the formal conditions of their physical placement are primary concerns in Horn’s work. She is known predominantly for her sculpture and photography, but drawing has been a major part of her practice for the past twenty years. The artist’s engagement with the medium of drawing is such that she has said, ‘If you were to ask me what I do, I would say that I draw. That is the primary activity and all my work has it in common, regardless of idiom or material’ (Roni Horn, quoted in Paulo Herkenhoff, ‘What Is Drawing for Roni Horn?’ in Roni Horn: Drawings, exhibition catalogue, Galerie d’Art Graphique, Centre Pompidou, Paris, 2003, p.27).

Were 12 is one of a series of drawings in which pure pigment is applied directly to paper. In a meticulous process that can take several months Horn begins by fixing rich red pigment to paper with successive brushings of varnish, creating a dense, rough surface. She then cuts the pigmented paper into strips or small geometric shapes. These segments are joined edge to edge with plain paper to create complex and delicate assemblages. The sculptural construction of the drawings is precise; the pieces of paper do not overlap but are carefully juxtaposed. The exact arrangement of the pieces of plain and pigmented paper demonstrates Horn’s sculptural approach to assemblage and her ongoing formal investigation of placement.

Horn began making drawings in this way in the mid-1980s. Over time they have become larger and more formally complex. In Were 12 the sophisticated composition of curvilinear and geometric shapes suggests the outline of flowers. The two distinct forms in the drawing exist in a complementary dialogue and recall the motif of doubling in Horn’s sculptural installations. Jonas Storsve has described the sensual effect of repeated forms in Horn’s drawings. He has written, ‘The connection between two forms, that is one of the leading strands of [Horn’s] work, can be taken as a simple transcription of sensuality which is also present in the very tactile handling of the materials’ (Storsve, ‘Introduction’, Roni Horn: Drawings, p.14).

The work’s title suggests Horn’s interest in language and semantics. Dieter Schwarz has argued that the titles of Horn’s drawings suggest interrelation, saying: ‘[T]he titles ... have in common that they cannot stand independently, but require syntactic completion ... These titles emphasise the incompleteness of each individual element of a drawing, which does not exist independently, but refers to one alongside’ (Schwarz, ‘Just Doubles This The Distant Doubles Must As &amp; others’, in Roni Horn: Rare Spellings, exhibition catalogue, Kunstmuseum Winterthur, 1993, p.116). Other pigment drawings by the artist bear titles including Just, Could, So and Too. Like Were, these are simple words whose brevity belies the range of their possible meanings.