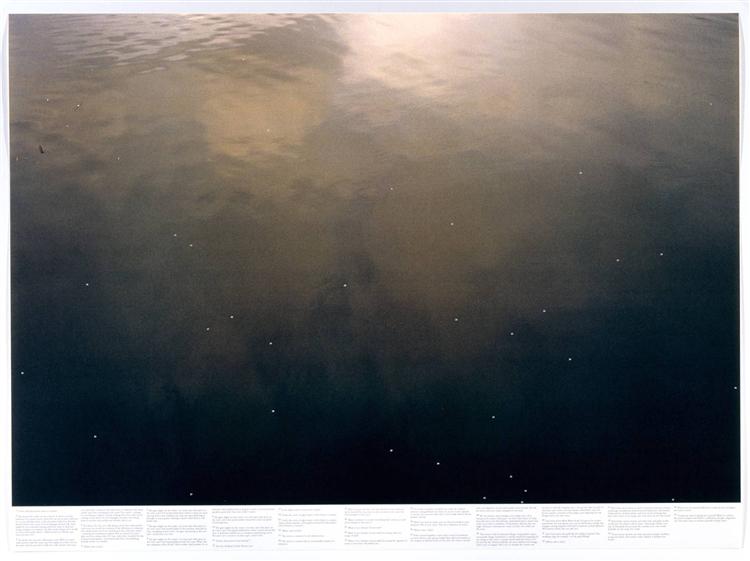 Untitled (from the series Still Water (The River Thames, for Example))

Still Water (The River Thames, for Example) is a series of fifteen large photo-lithographs of water, printed on white paper. Each of the images focuses on a small area of the surface of the river Thames. The colour and texture of these watery surfaces varies dramatically between images: colours range from black to blue and from dark green to khaki-yellow, and in each case the water’s texture is differently augmented by tidal movement and the play of light. Close inspection of the images reveals that tiny numbers in typeface are dotted like specks of flotsam over the water’s surface. These numbers refer to footnotes printed along the lower edge of each image’s white border. The footnotes present a series of musings and quotations on the significance of the river and the moods and narratives it evokes. Tate’s Still Water (The River Thames, for Example) is from an edition of seven.

The series Still Water (The River Thames, for Example) is one of three similar projects dating from 1999–2000 in which Horn used photographs of the water of the Thames. These prints are part of a larger public arts project involving a group of artists commissioned by the Public Arts Development Trust in London and Minetta Brook in New York to produce new works connected with the Thames and Hudson waterfronts. For her three Thames projects, Horn focused only on the stretch of the river that runs through the heart of London, because of its centrality to the daily life of the city (‘Roni Horn Interview: Water’ [n.p.].) Another Water (2000) is an artist’s book that explores the surface of the river with photographs taken over the period of a year. As with Still Water, each photograph is footnoted. Some Thames 2000 for the University of Akureyri, Iceland, is a permanent installation of some eighty photographs of water displayed in the university’s public spaces, thus echoing the flow of human traffic through the institution. Horn’s works that focus on the textures of water are driven in part by the artist’s fascination with the changeability of the Thames as a tidal river. She explains: "The Thames has this incredible moodiness, and that’s what the camera picks up. t has these vertical changes and it moves very quickly. It’s actually a very dangerous river and you sense that just by looking at it ... [E]very photograph is wildly different – even though you could be photographing the same thing from one minute to the next. It’s almost got the complexity of a portrait." (Quoted in ‘Roni Horn Interview: Water’ [n.p.].)

The compelling quality of water to inspire contemplation and fear, and the diverse meanings and references invoked by its textures and depths, are significant themes in the Still Water (The River Thames, for Example) images. Contemplation is made more pronounced by the use of the footnotes which encourage the viewer to concentrate on different parts of the water’s surface. The text of the footnotes, while appearing strictly ordered according to the numbering system, is presented in a loose, fragmentary, stream of consciousness style. It seems that the viewer is encouraged to listen in on a conversation between the artist and herself. Some footnotes relate anecdotes connected with the Thames, particularly concerning incidences of suicide involving the river. Interspersing these observations are references to films and songs, and to literary sources including novels by Joseph Conrad (1857–1924), Charles Dickens (1812–70) and William Faulkner (1897–1962), and the poetry of Emily Dickinson (1830–86), whose works have inspired Horn elsewhere, such as in the installation Key and Cue, No. 1755 (reproduced in Roni Horn aka Roni Horn catalogue volume, pp.90–1.) The purpose of each footnote is to articulate a point of connection between viewer and image. In P13059, footnote 22, Horn describes this connection: "This footnote (and all the others) gives confluence to this spot on the paper ... to this undulation in the water, to this greenish color of ink deployed to image the water, to the idea of water, all water, to the sensual surface of this paper, to the moment when you happened upon this number, and to you in that moment."