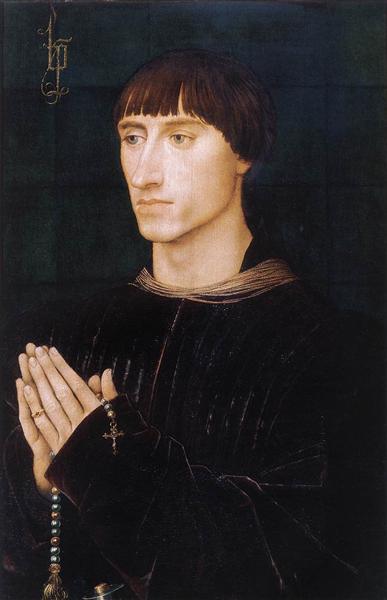 The Diptych of Philip de Croÿ with The Virgin and Child consists of a pair of small oil-on-oak panels painted c. 1460 by the Netherlandish artist Rogier van der Weyden. While the authorship and dating of both works are not in doubt, it is believed but not proven that they were created as wings of a devotional diptych and that at some unknown time the panels were broken apart. A diptych panel fitting the description of the Mary wing was described in a 1629 inventory of paintings owned by Alexandre d'Arenberg, a descendant of Philip I de Croÿ (1435–1511). Both have been approximately dated to 1460 and are now in Antwerp and San Marino, CA respectively. The reverse of de Croÿ's portrait is inscribed with the family crest and the title used by the sitter from 1454 to 1461.

The right hand panel depicts Philip I de Croÿ, chamberlain to Philip the Good and comte de Chimay from 1472 until his death, possibly at battle, in 1482. De Croÿ would have been around 25 at the time of the portrait, and the style of his haircut has been used to approximately date the work. The left wing, today in San Marino, shows the Virgin and Child against a gold background depicted in a style indebted to Byzantine Marian icons.

Van der Weyden underscores the idea of the Virgin panel being an unearthly apparition before the donor by giving her wing a golden background which contrasting sharply with de Croÿ's more muted and ordinary flat backdrop. The artist further establishes a link between the human and divine through the playful manner of given to Christ. As with van der Weyden's other mother and child diptych's the child faces the donor, while his hand is stretched outwards, almost beyond the boundary of the right hand panel, as if to make a connection with the donor to the left. Art historian Martha Wolff suggests the implication of this gesture is to extend the connection to the actual viewer presumably worshiping at the diptych -like de Croÿ- before the mother and child.

After van der Weyden's appointment as official painter to the city of Brussels in 1436, he became a highly sought after painter of both secular and donor portraits. While the surviving works of his mid career are mainly single religious works and triptychs, by c. 1460 his reputation and the demand for his work was such that he seems to have concentrated on commissions. These panels are amongst four confirmed diptychs where he paired the patron opposite a representation of the Virgin and Child. In all a half-length male patron is represented on the left wing, with the tell-tale motif of hands folded in prayer. The Virgin and Child are always positioned on the right, reflecting the Christian reverence for the right hand side as the "place of honour" alongside the divine. Similarly, the donor's portrait is always set against a flat dark nondescript background, while the Virgin and Child are framed against brilliantly lit golden or gilded backdrops. van der Weyden is widely credited as the first to use the diptych format for donor portraits and for establishing conventions that were to last until the mid 16th century; his are the first to combine a half length portrait (of the donor) with a half length depiction of a saint or saints. The pairing with the Mary panel appeared as if a vision appearing before the donor.