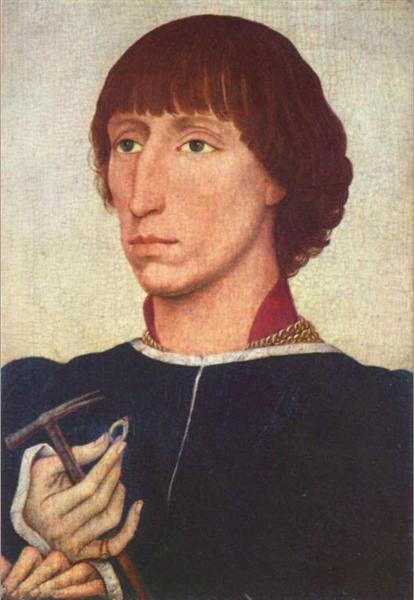 Portrait of Francesco d'Este is a small oil on wood panel painting by the Netherlandish painter Rogier van der Weyden dating to around 1460. The work is in good condition and has been in the Metropolitan Museum of Art, New York since 1931. When attributed as a van der Weyden in the early 20th century, there was much speculation amongst art historians as to the sitter's identity. He was identified as a member of the d'Este family from the crest on the reverse, and long thought to be Francesco's father Lionello, an Italian and highly placed Burgundian prince and patron of Rogier. In 1939 Ernst Kantorowicz identified the man as Lionello's illegitimate son Francesco (c. 1430 – after 1475), which is now generally accepted. The panel was painted when the sitter was about 30 years old and is considered one of van der Weyden's finest portraits, in many ways a culmination of his later, more austere work.

Van der Weyden sought to flatter d'Este; although not handsome, he is shown as broad chested, with a sensitive and cultured face, keen expression, long neck and aquiline nose. The hammer and ring (the latter only revealed after a 1934 cleaning) clutched in his hand are likely intended as status symbols although their exact significance has not been positively identified. Typically of van der Weyden, the sitter's fingers are highly detailed and prominent, shown as almost resting on the lower left of the panel frame, and are long, bony and highly detailed. The painting is unusually secular for the time, seeking to flatter d'Este's worldly position, rather than highlight his devotional worth or personal humility.

The portrait follows the structural conventions of van der Weyden's late career male portraits. It is a half length, three-quarters view of the sitter against a plain and shallow background. The background is one of its most striking features, its shallowness at odds with the deep, shadowed and atmospheric kind popular in Northern art since van Eyck. That the background is layered with white rather the more typical dark grey and black tones has been remarked on by many art historians.

The paintings of the Early Netherlandish masters fell out of fashion after the 16th century, and many disappeared from record only to re-emerge in the 19th century. This work was lost until sometime in the late 1800s when came into the collection of Sir Audley Neeld. There was much speculation as to the identity of the sitter, he was early identified as a member of the d'Este family from the crest shown on the back of the panel. In the early 20th century he was thought to be Francesco's father Leonello, based on similarities to the subject of a portrait of Pisanello. Leonello would have been around 42 at the time, and died from a cranial abscess the following year.

At another the time the panel was titled Portrait of a Goldsmith, presumably based on a misunderstanding of the significance of the hammer held in d'Este's right hand. Francesco's identity as sitter was established in 1939–40 by the art historian Ernst Kantorowicz. His representation here bears striking resemblance to a documented contemporary portrait found in a piece of iconography in Rome, as well as to an attributed portrait in the National Gallery of Art, Washington.