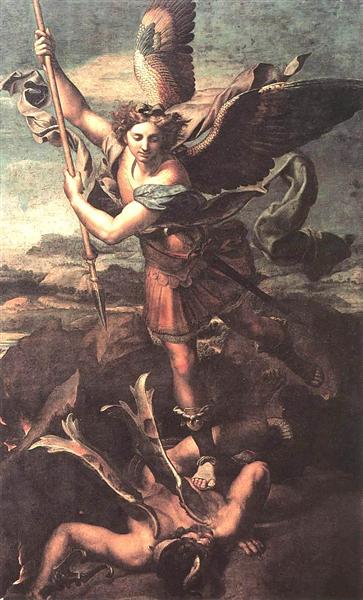 It is a large-scale and mature version of a subject he had earlier treated in the youthful miniature called St. Michael. Both works are located in the Louvre in Paris.

Raphael first visited the subject of the archangel Michael at the behest of Guidobaldo da Montefeltro, Duke of Urbino. The miniature was completed in 1504 or 1505 on the back of a draughtboard, possibly commissioned to express appreciation to Louis XII of France for conferring the Order of Saint Michael on Francesco Maria I della Rovere, Urbino's nephew and heir. A little more than a decade after completing the little St. Michael, Raphael was commissioned to revisit the theme, producing St. Michael Vanquishing Satan for Pope Leo X.

Raphael's contemporary, Sebastiano of Venice, wrote to Michelangelo in July of the year the painting was completed to complain of the coloring of the work, suggesting that the figure looked smoky or made of iron because of the exaggerated contrast between the two sides. This may have been the hand of Giulio Romano, who according to art historian Eugène Müntz overused black in a heavy-handed fashion to "obtain a more powerful effect." To deal with coloring issues, the painting was restored in 1537–1540 by Francesco Primaticcio. Following further restoration in 1685, it was transferred from the original wood to canvas in 1753.