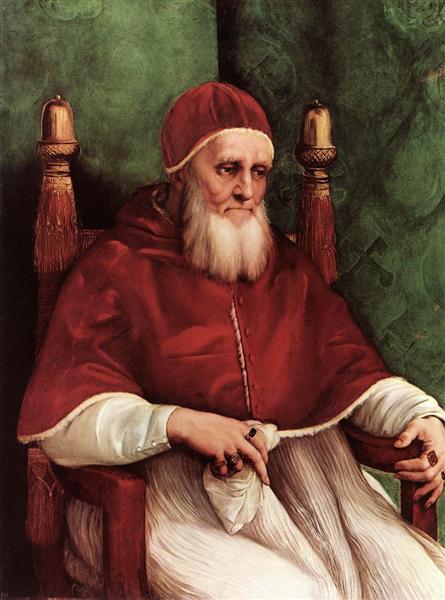 The portrait shows Giuliano della Rovere, Pope Julius II, elected in 1503 after one of the shortest conclaves ever (he bribed everyone). He was a lover of war, who led his own armies; and a lover of art, commissioning some of the greatest works in western history: Raphael's decorated rooms in the Vatican and Michelangelo's Sistine Chapel ceiling. The presentation of the subject was unusual for its time: previous Papal portraits showed them frontally or kneeling in profile. It was also exceptional at this period to show the sitter so evidently in a particular mood. In fact, Julius was depressed because the city of Bologna had seceded from the papal states. He expressed his grief at this political disaster by growing a beard, imitating what Renaissance humanists had discovered was an ancient form of mourning. It is the beard that enables this portrait to be dated 1511-12. The intimacy of this image was unprecedented in Papal portraiture, but became the model, followed by most future painters, including Sebastiano del Piombo and Diego Velázquez.

*The link between these phases of the provenance and the NGL picture is not certain in comparison the version in the Uffizi. See references for more detail.