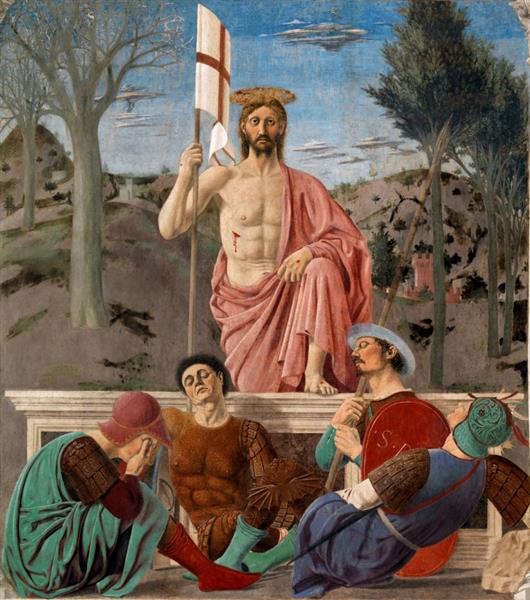 This painting now resides in Piero della Francesca’s hometown of San Sepolcro, at the Museo Civico. The painting depicts the figure of Christ standing over four sleeping soldiers. The artist included a self-portrait in the figure of the sleeping soldier who is dressed in brown. During World War II, the city of San Sepolcro was supposed to be bombed, which would have destroyed the painting. But, the pilot of the bomber plane, Captain Clarke, who had read Aldous Huxley’s reports that The Resurrection was the greatest painting in the world, remembered that the painting was held in San Sepolcro. He ordered his men to stop the bombing, this saving the painting and the town from annihilation. After the fighting was over, it was determined that the Nazi soldiers had already left the area, and so the bombing wasn’t necessary. Captain Clarke was regarded as a hero, and the city of San Sepolcro named a street after him as a symbol of their gratitude.

The Resurrection is a fresco painting by the Italian Renaissance master Piero della Francesca, painted in the 1460s in the Palazzo della Residenza in the town of Sansepolcro, Tuscany, Italy.


Piero was commissioned to paint the fresco for the Gothic-style Residenza, the communal meeting hall which was used solely by Conservatori, the chief magistrates and governors, who before starting their councils, would pray before the image. "The secular and spiritual meanings of the painting were always intimately intertwined." Placed high on the interior wall facing the entrance, the fresco has for its subject an allusion to the name of the city (meaning "Holy Sepulchre"), derived from the presence of two relics of the Holy Sepulchre carried by two pilgrims in the 9th century. Piero's Christ is also present on the town's Coat of Arms.


Jesus is in the centre of the composition, portrayed in the moment of his resurrection, as suggested by the position of the leg on the parapet of his tomb, which Piero renders as a classical sarcophagus. His stern, impassive figure, depicted in an iconic and abstract fixity (and described by Aldous Huxley as "athletic"), rises over four sleeping soldiers, representing the difference between the human and the divine spheres (or the death, defeated by Christ's light). His figure in the commune's council hall "both protects the judge and purifies the judged" according to Marilyn Aronberg Lavin. The landscape, immersed in the dawn light, has also a symbolic value: the contrast between the flourishing young trees on the right and the bare mature ones on the left alludes to the renovation of men through the Resurrection's light. Andrew Graham-Dixon notes that apart from the wound, Christ's "body is as perfectly sculpted and as blemish-free as that of an antique statue. But there are touches of intense humanity about him too: the unidealised, almost coarse-featured face; and those three folds of skin that wrinkle at his belly as he raises his left leg. Piero emphasises his twofold nature, as both man and God."


The guard holding the lance is depicted sitting in an anatomically impossible pose, and appears to have no legs. Piero probably left them out so as not to break the balance of the composition.


According to tradition and by comparison with the woodcut illustrating Vasari's Lives of the Painters, the sleeping soldier in brown armor on Christ's right is a self-portrait of Piero. The contact between the soldier's head and the pole of the banner carried by Christ is supposed to represent his contact with the divinity.


The composition is unusual in that it contains two vanishing points. One is in the center of the sarcophagus, because the faces of the guards are seen from below, and the other is in Jesus's face. The top of the sarcophagus forms a boundary between the two points of view, and the steepness of the hills prevents the transition between the two points of view from being too jarring.


Sansepolcro was spared much damage during World War 2 when British artillery officer Tony Clarke defied orders and held back from using his troop's guns to shell the town. Although Clarke had never seen the fresco, his diary records his shock at the destruction in Monte Cassino and, apparently remembering where he had read of Sansepolcro, ordered his men to hold fire just as methodical shelling had begun. Clarke had read Huxley's 1925 essay describing the Resurrection, which states: "It stands there before us in entire and actual splendour, the greatest picture in the world." It was later ascertained that the Germans had already retreated from the area — the bombardment had not been necessary, though Clarke had not known this when he ordered the shelling stopped. The town, along with its famous painting, survived. When the events of the episode eventually became clear, Clarke was lauded as a local hero and to this day a street in Sansepolcro bears his name.