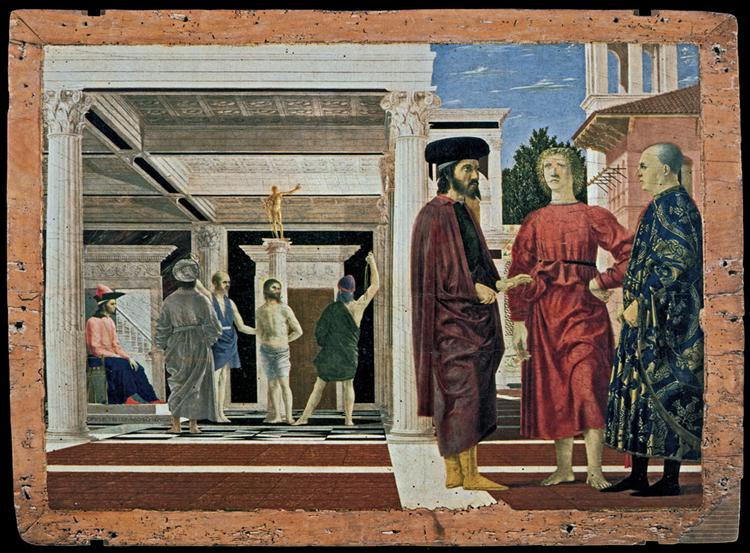 The Flagellation of Christ

A diminutive 23 by 32 inches, this painting has been called the best small painting in the world. The subject and composition of the painting is unusual, and the iconography in the painting has been subject to much conjecture. The painting illustrates the flagellation of Christ in an open courtyard, while three unidentified men stand indifferent in the foreground. The small painting is lauded for the use of linear perspective, by portraying the men in the background at a smaller size than those in the foreground of the painting. Many interpretations surround the work, and most are focused on the three men in the foreground of the painting, who are unidentified. Theories range from the men being men of note in Piero’s time, to Pontius Pilate and other Jews, and an angel flanks by and emperor and young man.

The Flagellation of Christ (probably 1455–1460) is a painting by Piero della Francesca in the Galleria Nazionale delle Marche in Urbino, Italy. Called by one writer an "enigmatic little painting," the composition is complex and unusual, and its iconography has been the subject of widely differing theories. Kenneth Clark placed The Flagellation in his personal list of the best ten paintings, calling it "the greatest small painting in the world".

The theme of the picture is the Flagellation of Christ by the Romans during his Passion. The biblical event takes place in an open gallery in the middle distance, while three figures in the foreground on the right-hand side apparently pay no attention to the event unfolding behind them. The panel is much admired for its use of linear perspective and the air of stillness that pervades the work, and it has been given the epithet "the Greatest Small Painting in the World" by the art historian Kenneth Clark.

The painting is signed under the seated emperor OPVS PETRI DE BVRGO S[AN]C[T]I SEPVLCRI – "the work of Piero of Borgo Santo Sepolcro" (his native town).

The Flagellation is particularly admired for the realistic rendering of the hall in which the flagellation scene is situated in relation to the size of the figures and for the geometrical order of the composition. The portrait of the bearded man at the front is considered unusually intense for Piero's time.

Much of the scholarly debate surrounding the work concerns the identities or significance of the three men at the front. Depending on the interpretation of the subject of the painting, they may represent contemporary figures or people related to the passion of Christ, or they may even have multiple identities. The latter is also suggested with respect to the sitting man on the left, who is in one sense certainly Pontius Pilate, a traditional element in the subject. The notion of two time frames in the composition is derived from the fact that the flagellation scene is illuminated from the right while the supposedly "modern" outdoor scene is illuminated from the left. Originally the painting had a frame on which the Latin phrase "Convenerunt in Unum" ("They came together"), taken from Psalm 2, ii in the Old Testament, was inscribed. This text is cited in Book of Acts 4:26 and related to Pilate, Herod and the Jews.

According to a conventional interpretation still upheld in Urbino, the three men would be Oddantonio da Montefeltro, Duke of Urbino between his advisors, Manfredo dei Pio and Tommaso di Guido dell'Agnello, who were murdered together on July 22, 1444. Both advisers were held responsible for Oddantonio's death due to their unpopular government, which led to the fatal conspiracy. Oddantonio's death would be compared, in its innocence, to that of Christ. The painting would then have been commissioned by Federico da Montefeltro, who succeeded his half brother Oddantonio as Lord of Urbino. According to another interpretation, the two men to the left and right of the youth would represent Serafini and Ricciarelli, both citizens of Urbino, who allegedly murdered Oddantonio together with his two bad advisors. Against these interpretations speaks the written contract signed by Federico and the citizens of Urbino, ´that he would not bear in remembrance the offenses inflicted on Oddantonio, that no one would be punished for it and that Federico would protect all who may be compromised in these crimes´. Moreover, Oddantonio's corpse was buried in an unnamed grave. A painting dedicated to the memory of Duke Oddantonio and to his rehabilitation would thus have been a case of betrayal to the citizens of Urbino.