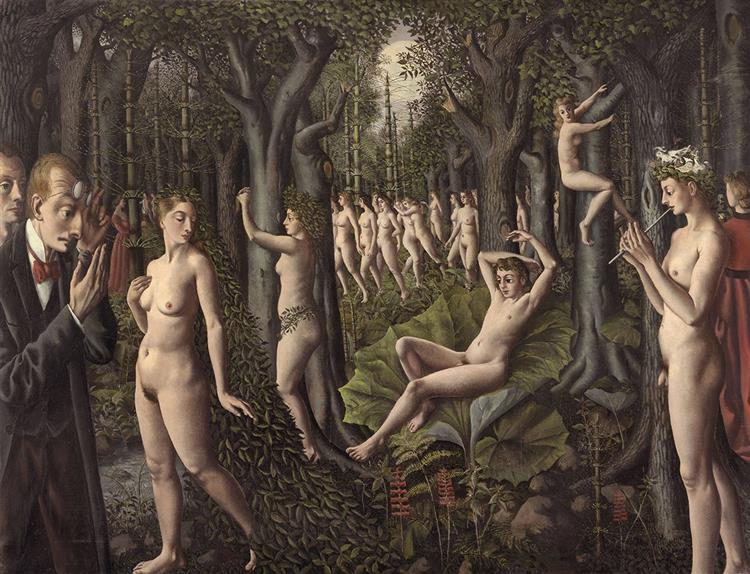 The Awakening of the forest

Paul Delvaux painted The Awakening of the Forest in the late 1930’s, a time when the exposure to Surrealist art and ideas revolutionized his own ideas about painting. Delvaux was especially influenced by the early paintings of Giorgio de Chirico, whom Delvaux called "The Poet of Emptiness." He adopted Surrealism as a visual language that would help him bring to life his inner world filled with childhood memories and fantastical settings. The Awakening of the Forest, like a number of his other paintings, such as Tribute to Jules Verne (1971), was inspired by Delvaux's childhood fascination with the French novelist Jules Verne. Here, he depicts his interpretation of a scene from Verne’s Journey to the Center of the Earth (1864), in which the protagonists (Professor Otto Lidenbrock and his nephew Axel) discover a prehistoric forest deep inside the Earth.

Delvaux paints professor Lidenbrock on the left side, examining a rock or a fossil, seemingly oblivious to the forest of naked female bodies that is displayed in front of him. The figure standing behind the professor, gazing away from the scene, is a self-portrait of the artist in the role of Axel. On both sides, there is a female figure in long Victorian dress holding an oil lamp, attempting in vain to shed light on the scene. The rich red pigment of these figures' dresses contrast with the forest’s’ dark green shades and the pale complexion of the naked skin of the nudes. The forest is illuminated by a full moon, and the naked figures seem at one with the forest. Some of them combine human and vegetal elements: sprouting leaves instead of hair, they seem to embody a primordial human state. The protagonists from the book seem out of place, and even intrusive next to the naked bodies.

Regardless of the large number of naked figures and their detailed portrayal, The Awakening of the Forest maintains a feeling of emotional detachment and general unawareness, that only adds to the eerie effect of the painting. There is a lack of communication between the figures: they seem more or less oblivious of one another. There is a sense of alienation, an overwhelming silence, that pierces through the canvas. Delvaux creates a world of suspended and unsatisfied desires, in which all but the oblivious professor, obsessed with his work, seem to express a melancholic awareness of the unimaginable distance between their desire and its consummation.

This painting possesses all the bizarre elements that ultimately make the main features of Delvaux's work: merging of opposing components, representation of the nudes, eerie light, and the sense of unease. This painting seems largely indebted to Édouard Riou, a French painter who illustrated six novels by Jules Verne. Riou’s illustrations of moonlit underground forests were tremendously influential on Delvaux’s formative years.