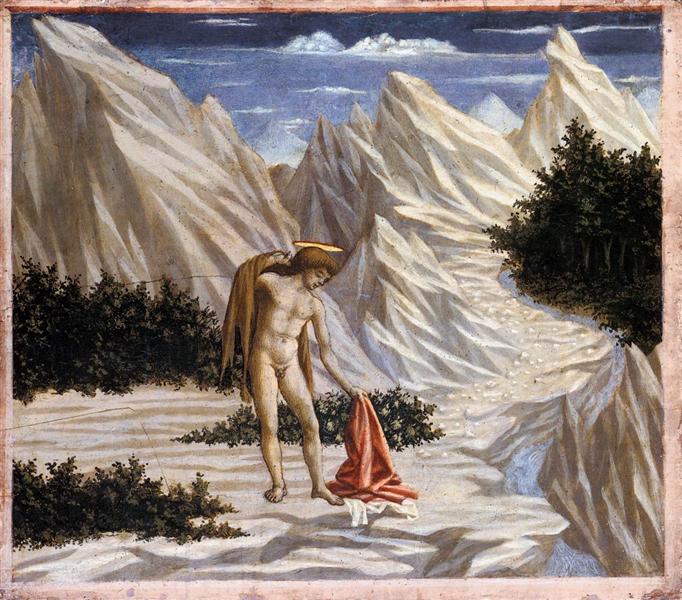 The ideas of Humanism and the Early Renaissance found expression in the arts, first literary with Petrarch and Boccaccio in the 14th century, then, in the 15th century, in visual art. The intellectuals of the Early Renaissance aimed at detailed and rigorous knowledge, founded on rational and demonstrable bases, to comprehend the world around them. Following these intellectual suggestions, Filippo Brunelleschi, the most influential architect of the 15th century, conceived the scientific method of the Geometric Perspective. It allowed to define and rationally control the space, designed on a human scale.

Brunelleschi, Donatello, and Masaccio, founders of the First Florentine Renaissance, posed the problem of transferring a three-dimensional reality to the two-dimensional representation plane, maintaining the optical illusion of spatial depth. Giotto had found an intuitive solution. These new artists make use of geometric and mathematical rules, theorized by Brunelleschi and then completed by Leon Battista Alberti, another great Florentine artist. They built a perspective cage as a basis to set the image. Donatello and Masaccio draw from these theories fundamental information to organize their compositions into unitary and coherent sets. Those sets were structured on the basis of a perspective framework with a unitary and centralized vanishing point, according to geometrically calibrated proportions.

In the artistic representations that adhere to Brunelleschi's perspective view, like those of Donatello and Masaccio, the human body also conforms to rational and scientific norms that dictate its forms and proportions, deduced from the study of ancient sculpture and the observation of real human figures, taken as a model. The artists aimed to arrive at a concordance of the parts such as to make the whole appear as the ideal reflection of inner harmony.

First, Donatello applied Brunelleschi's perspective in the marble predella with San Giorgio who frees the Princess (1415-17). There he associated the foreshortened relief to the foreshortened perspective: a bas-relief that is drooping until it reaches one minimum thickness for subjects located in the distance. Ten years later, Masaccio, probably following Brunelleschi's advice, created the extraordinary Trinità of Santa Maria Novella (c.1427) where the construction of the architectural structure is perfectly foreshortened. Vasari will say "it seems to have pierced the wall." The work is a manifesto of the perspective culture formulated in Florence between the 1420s and 1430s.

The artists in the Early Renaissance not only admired the beauty of the human body based on perspective, anatomy, and the doctrine of proportions. They also investigated the subjectivity of the individual, the expression of feelings in front of the facts of history. Masaccio's paintings and Donatello's sculptures present a real and at the same time heroic humanity, composed of individuals with bodies firmly built and set in space that, taking on serious attitudes, or moved by powerful emotions, express moral strength, energy, and dignity. This humanity, inserted in a rationally measurable natural space, embodies the ideals of Humanism.

A great ideal and example to look at for the artistic style of the Early Renaissance, is Classical art, in its ability to imitate the natural. The artists of the fifteenth century aspire to obtain a plausible representation of space, body, movement, and feelings; thus, they become great scholars and connoisseurs of the classical arts. Artists could learn about ancient art directly through two ways: visiting the antique dealers or staying in the cities where archaeological excavation campaigns had begun. Donatello and Brunelleschi, for example, stayed long in Rome. As an architect, Brunelleschi studied the style, the orders, the types of classical architecture, its proportional relationships, and its construction techniques. Donatello, as a sculptor, tried to understand the rules of ancient sculptural art, the proportions of the human body, the expression of feelings, the use of color and materials, techniques (pursuing the perfection of the lost wax bronze casting, and terracotta).