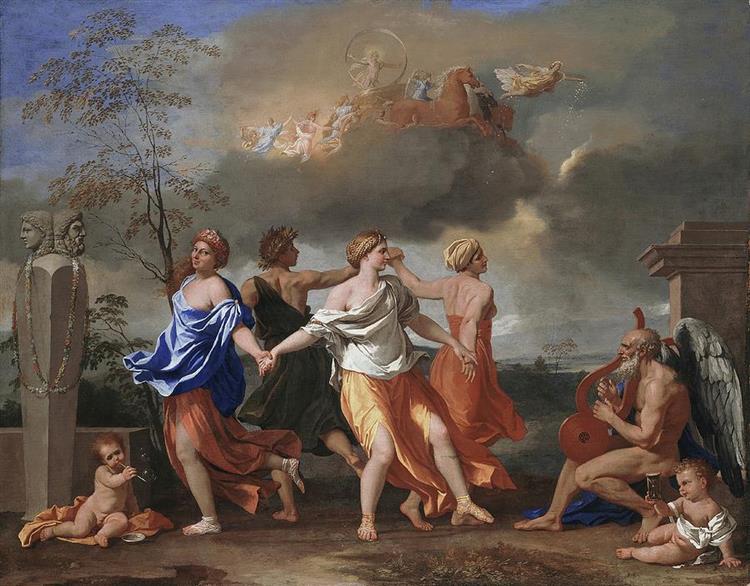 Dance to the Music of Time

A Dance to the Music of Time is a painting by Nicolas Poussin in the Wallace Collection in London. It was painted between about 1634 and 1636 as a commission for Giulio Rospigliosi (later Pope Clement IX), who according to Gian Pietro Bellori dictated its detailed iconography. The identity of the figures remains uncertain, with differing accounts.

The painting is well known for giving its name to the A Dance to the Music of Time novel cycle, though this title is first seen in a Wallace Collection catalogue of 1913. Before that it was given titles referring to the Four Seasons. In the 1845 sale it was called La Danse des Saisons, ou l'Image de la vie humaine.

Four figures, holding each other by the hand, dance in a circle, as Time plays a lyre on the right. The scene is set in the early morning, with Aurora, goddess of dawn, preceding the chariot of Apollo the sun-god in the sky behind; the Hours accompany him and he holds a ring representing the Zodiac. According to Bellori, the subject was devised by Rospigliosi. The four dancers represented, beginning with the one at the back seen mostly from behind: Poverty, Labour, Riches, and Pleasure or Luxury. These represent a progression in human life, completed by Pleasure or Luxury leading to Poverty again. As the Four Seasons Poverty would be Autumn, Labour Winter, and so on. The suggestion of Anthony Blunt that, unusually for a group of the seasons, Autumn/Poverty at the rear of the group was male is now generally accepted, and the museum now describe him as Bacchus. This follows the story invented by Boitet de Frauville in his Les Dionysiaques that, responding to complaints from the Seasons and Time, Jupiter gave the world Bacchus and his wine in order to compensate for the miserable living conditions mortals must endure. André Félibien, the friend and biographer of Poussin, explained the picture in the same terms, except that where Bellori identified Summer with Luxury, Félibien said that it represented Pleasure.

These identifications are disputed by Malcolm Bull, at least as the original intention. He traces the iconography of the painting to the Late Greek poet Nonnus, reflected in the Hymne de l'Automme of Pierre de Ronsard. Nonnus' descriptions of the four seasons, as translated into French, are closely followed by Poussin: "on the left is Spring, with a garland of roses in her hair; at the back is Autumn, whose hair has been cropped by the winds but whose brow is wreathed with olive branches; Winter is next, with her bound hair and shadowed face, and at the front is Summer, dressed in white with ears of corn in the braids of her hair." Bacchus himself appears, in his double aspect as a young and old figure, in the herma at left. Bull suggests that Rospigliosi, an intellectual and author with a taste for allegory, invented the other interpretation "during or after its completion", while Ingamells feels that "Poussin was not unduly concerned with the precise identification of the figures".