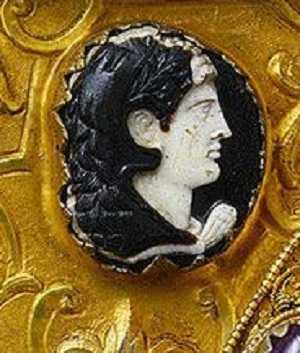 Cameo with Head of Ruler (detail) - Nicholas of Verdun

Nicholas of Verdun is renowned as the greatest representative of Mosan art - a regional style of Romanesque art practiced in and around the Meuse River valley, especially the area around Liege and the Benedictine monastery of Stavelot. A master of goldsmithery and precious metalwork, he is considered to be the finest enameller and metalworker of his day, and an important influence in the transition from Romanesque to Gothic. His contribution to medieval Christian art is founded on three major works: the altarpiece in the Abbey Church at Klosterneuburg (1181); The Shrine of St Mary for Tournai Cathedral (1205); and The Shrine of the Three Kings in the treasury of Cologne Cathedral (1180-1225)

Nicholas of Verdun (1130–1205) was a French artist, one of the most famous goldsmiths and enamelists of the Middle Ages. He was a major figure in Romanesque art, and the leading figure of Mosan art in his day. He created shrines, figurines and candlesticks decorated with precious stones. He traveled around Europe to fulfill major commissions.

During the last quarter of the 12th century, steps were being taken towards Classical Antiquity by a Mosan metalworker, Nicholas of Verdun. Nicholas was a remarkable French enamelist and goldsmith of the Middle Ages. His work transitions from late Romanesque to early Gothic styles. During his career he spent most of his time traveling to different locations where he was commissioned to develop most of his work. Some examples of his transition towards an antique style can be seen through his great craftsmanship of metal making of the enameled altarpiece which was created for Klosterneuburg Monastery, near Vienna in c.1180. The work reveals his master metalworking and the technique of champlevé enameling. His even more notable Shrine of the Three Kings in the Cologne Cathedral, about 1200, would be an even more appropriate example drawing the observer towards classical representations of Antiquity. (Myers & Copplestone 1985, 350)

In his work the artist reveals a deep understanding for the conventions centering on the physicality of the classical draperies which oblique the figures, while his faces resemble a classical Byzantine style. Nicholas of Verdun was an innovator and a master metalworker. It was no accident that his work development occurred in the medium of metal making. The records indicate that most of his work ranges from figurines, to decorated candles with precious stones and shrines. (Myers & Copplestone 1985, 350-351)

For metalworkers the process of beating metal was initially performed in the development of works of art, but after c.1150 casting became a more prevalent technique for sculptors. Through these formative stages a process of modeling rather than carving was being performed. This allowed artists to gain more movement and gesture, and to work in miniature scales which allowed the metalworkers to show and explore their talents in a more productive fashion.

Color during the Romanesque period was dearest to the Romanesque patrons of the arts. This made the use of enameling ideal during this time period. Translucent glaze was a new addition in art which epitomized what was perhaps the most deeply felt urge in aesthetics of the high Middle Ages. This was particularly popular in Western Europe. Artists were using it to develop a sense of mystic appeal particularly through jewelry, and enameling was considered to have the closest resemblance to the Byzantine mosaics. From this, preoccupation with the Byzantine forms of the 12th century were evident in the work and the Middle Ages ended up transitioning towards the approach of classical antiquity from a background of abstract and stylized art.( Myers & Copplestone 1985, 369) There were two suggestions regarding the artists signatures in this period one was to suggest that they were intended as requests for prayer from spectators on behalf of the artists, so as to assist them to gain eternal salvation and secondly signatures were indicators either of social status of the artist or of the civic pride of the organization that had obtained the artist’s service. (Petzold 1995, 25-28)