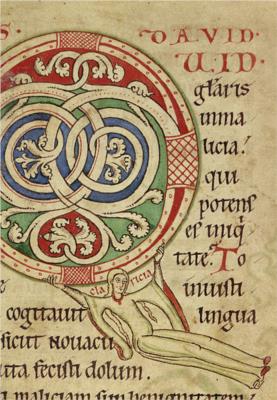 Claricia, a nun living in a Bavarian convent, was a manuscript illuminator. We know of her from a signature and what may be a self-portrait in a twelve-century German psalter (a manuscript of the psalms).

The 'Claricia Psalter' was made for, and most likely by, a group of Benedictine nuns at the abbey of Saints Ulrich and Afra in Augsburg, Germany. Although the psalter itself, along with its calendar, dates to the late-12th or early 13th century, a number of texts and prayers were added in the mid-13th century. Most striking about the manuscript are its illuminations, which include a prefatory cycle, full-page miniatures, and historiated initials. While all are Romanesque in style, they vary greatly in quality and technique, and three or four different artists seem to have been at work. The psalter takes its name from one of the initials, which depicts a young girl in secular dress swinging from the initial "Q," who has "Claricia" written around her head. It has been suggested that the image represents a novice artist who signed her work, but there are many other theories, none of which is certain.

Claricia or Clarica was a 13th-century German illuminator. She included a self-portrait in a South German psalter of c. 1200, now in The Walters Art Museum, Baltimore. In the self-portrait, she depicts herself as swinging from the tail of a letter Q. Additionally, she inscribed her name over her head.

"Claricia’s hand is just one of several in this manuscript, leading Dorothy Miner to conclude on the basis of her dress – uncovered head, braided hair, and a close-fitting tunic under a long-waisted dress with long tapering points hanging from the sleeves – that she was probably a lay student at the convent."