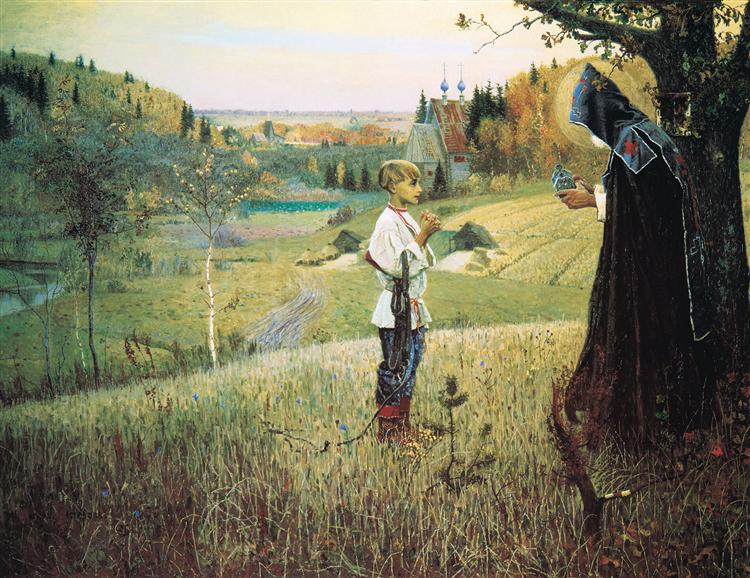 The Vision of the Young Bartholomew

The Vision to the Youth Bartholomew (Russian: Видение отроку Варфоломею) is a painting by the Russian artist Mikhail Nesterov, the first and best known work in his series on Sergius of Radonezh, a medieval Russian saint. The painting illustrates an episode from "The Life of St. Sergius" by Epiphanius the Wise:

The image of St. Sergius of Radonezh, near and dear to the artist since childhood, was embodiment of the moral ideal for Nesterov. Particularly important role Nesterov gave St. Sergius in rallying the Russian people.

Sketches of landscapes the artist wrote in 1899 in the vicinity of the Trinity Sergius Lavra, settling in the village Komyakovo near Abramtsevo. Abramtzevo became one of the favorite places of Mikhail Nesterov.

There he finished top (landscape) part and went to Ufa. The artist hurried, because he was preparing for the XVIII Peredvizhniki exhibition and despite having the flu, continued to work actively. One day he felt dizzy, he stumbled (he stood on a small stool), fell and injured the canvas. It was impossible to continue the work, he needed a new canvas, which finally was brought.

The painting, which caused the most contradictory opinions, became a sensation XVIII Peredvizhniki exhibition and was bought by Pavel Tretyakov for his gallery. Until the end of his days, the artist was convinced that "The Vision of the Youth Bartholomew" remained the best of his work. In old age, the artist used to say: