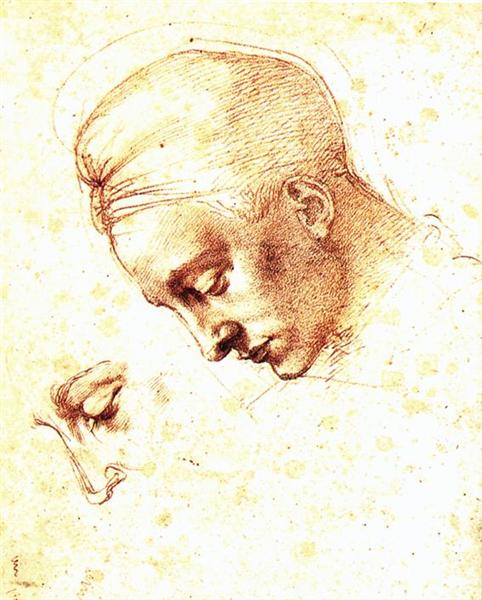 Leda and the Swan is a lost tempera on canvas painting by Michelangelo, produced in 1530 but now only surviving in copies and variants.

In 1512 Alfonso I d'Este, Duke of Ferrara went to Rome to reconcile with Pope Julius II, who had excommunicated him in summer 1510 for his alliance with Louis XII of France against the Republic of Venice. Julius absolved him and Alfonso spent a few days in Rome before returning to Ferrara. On 11 July he visited the Sistine Chapel, where Michelangelo was completing the ceiling. As he climbed the scaffolding he had a long and admiring conversation with Michelangelo, who promised him a painting.

Several years passed without the commission being formalised until Michelangelo had to be in Ferrara in 1529 to inspect its city walls as "governor general of fortifications" for the Florentine Republic, ready for an expected Imperial siege. On that occasion the Duke held Michelangelo to his promise and according to Condivi and Vasari he produced the work when he returned to Florence in August 1530 after the city's fall, perhaps using the time he had to spend in hiding. It was a square work in tempera, representing Jupiter as a swan making love to a reclining Leda (based on an composition from ancient Roman gems and seals), an egg and Castor and Pollux as children.

It was completed by mid-October 1530 but Alfonso described it as a "little thing" in Michelangelo's hearing and so he refused to hand it over. The work and some of the preparatory drawings were in fact acquired (either as a purchase or a gift) by Antonio Mini, who took it to France in 1531. In 1532 he left it to Francis I of France, who later sent it to the Palace of Fontainebleau. The best known copy is attributed to Rosso Fiorentino and hangs in the National Gallery in London, with others in the Gemäldegalerie (Dresden), the Gemäldegalerie (Berlin) and the Correr Museum in Venice. The Casa Buonarroti in Florence holds not only a copy but also a preparatory drawing of Leda's head, held to be by Michelangelo himself. There are also several prints of the work, the most faithful of which is thought to be the one by Nicolas Béatrizet, which also shows Castor and Pollux.