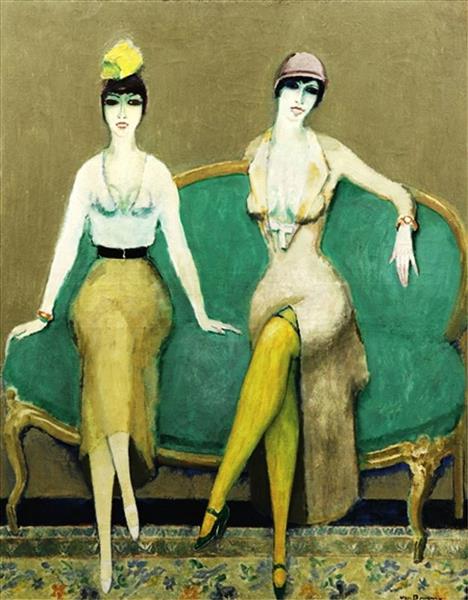 Dolly Sisters is a fine example of Kees van Dongen’s society period, known as the “Cocktail Age” when the painter was at the height of his fame and success. In the aftermath of the First World War, his Fauvist, anarchist style had softened and he had become a vital player on the Parisian social scene. The portrait became virtually his only subject and he painted countless depictions of the great names of this fashionable world, be they personalities from the arts, entertainment, finance or European aristocracy.

When he painted the present work, Van Dongen was living with his partner Jasmy Jacob, who ran the couture house in a sumptuous private mansion on the Rue Juliette-Lamber. This street became one of the most well-trodden in all of Paris, as it was here that Van Dongen would organise his celebrated preview parties, exhibiting the many portraits he painted at this time. At these soirées, a colourful mix of people would rub shoulders, from society women in evening dresses, to cabaret singers, actresses, dancers and politicians. Van Dongen himself described the unusual mix in these terms: “The world is a big garden, full of flowers, full of weeds […]. In today’s pleasure garden, everything can be stirred together and blended: this is the Cocktail Age”.

In 1925, the year of the present work, Van Dongen not only enjoyed a prestigious personal exhibition at the Galerie Bernheim-Jeune but also organised no less than three exhibitions at his home on the Rue Juliette-Lamber (one in May, one in September and one from 15th November to 15th December), and though the photographs of these functions have unfortunately disappeared, we can nevertheless assume that Dolly Sisters would have been presented at one of these three illustrious events.

The painting depicts two of the most striking personalities of the music hall world of the 1920s. The Dolly Sisters, whose real names were Rose and Jenny Dolly, were true celebrities of Parisian nightlife when they were painted by Van Dongen in 1925. The twin sisters, who were actresses and dancers, had found fame the decade before in the USA. After the First World War, they purchased a chateau in France and performed in a series of highly successful tours across Europe. Their most famous show, A Vol d’oiseau, was a headliner for eight years in Paris. Renowned not only for their talent as dancers but also for their lavish weddings, relationships with wealthy men, their love of sport and racing and their sumptuous collection of jewellery, these two sisters perfectly summed up the world of the Année Folles that Van Dongen so loved to depict.

This painting is one of a series of portraits of celebrities from the world of show-business, including the opera singer Mademoiselle Geneviève Vix dans le rôle de Salomé (1920), famous mime artist Maria Ricotti dans L’Enjôleuse (1921), the statuesque music-hall singer Suzy Solidor (1927) who would star in the film La Garçonne, Paulette Pax (1918) who would go on to play Joan of Arc, and not forgetting Lili Damita (1926), Joséphine Baker (1925) and Arletty (1931). The décor used for this painting, with the two sisters seated on a green velour armchair, is also the same used for several other portraits from this era, proving that the sittings did indeed take place in the painter’s studio on the Rue Juliette-Lamber.

In this portrait, as in others from this period, Van Dongen demonstrates remarkable mastery of color and light. The bright tones of his Fauvist period have given way to a more measured palette, in which greens, blues and greys replace the incandescent reds and oranges of his early years. His painting nevertheless retains its expressiveness; the green shadows on the faces giving the models an otherworldly charm. The painter skillfully deploys electric lights to highlight the bodies and faces, in the manner of a cinematographer. Far from conventional naturalism, Van Dongen manages to create a visual vocabulary conducive to recreating the atmosphere of those festive years that he so enjoyed, describing them in these terms: “I passionately love the life of my own time, so animated, so frenzied. […] Yes, I love things that shine, precious stones that sparkle, fabric that shimmers, beautiful women that inspire carnal desire… and painting gives me complete possession of all of that, for what I paint is often the obsessive realisation of a dream or a fixation.”