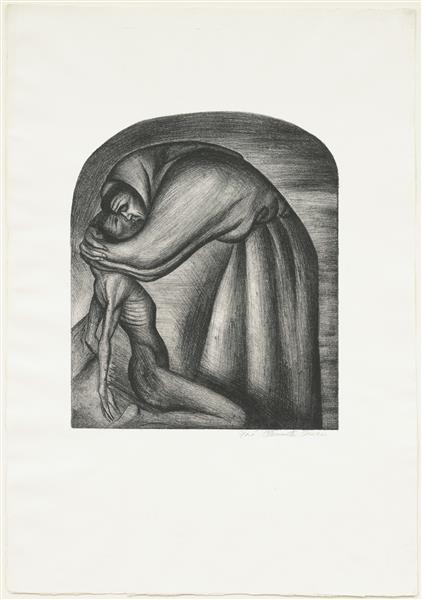 The Franciscan (El Franciscano) (1929) is a lithograph by Mexican artist José Clemente Orozco, that was created during his seven yearlong stay in the United States. In this period Orozco completed some of his most famous murals such as Prometheus (1930) at Pomona College in California and The Epic of American Civilization (1932-1934) at Dartmouth College in New Hampshire. He also exhibited in New York galleries, and at the encouragement of art dealer Carl Zigrosser of the Weyhe Gallery, he began making lithographs to reach a wider audience.

The Franciscan is based on a detail from Orozco’s mural cycle painted at the National Preparatory School. The lithograph depicts an enormous friar bending over to embrace a skeletal indigenous figure kneeling in front of him. At first, it may seem like a warm gesture, but upon a second look, this appears to be a suffocating embrace. The weary figure is enclosed in the tight grip while his arms are thrown back helplessly. The artist purposefully highlights the physical contrast between the friar and the indigenous figure: the friar’s face is expressive, and his big robe hangs loosely on his robust frame. In contrast, the native’s body is naked, and his face is blurred. Unlike the bulky friar, the indigenous figure is emaciated, his ribs, ankle, and hip bones are exposed. The Franciscan represents the relationship between the Church and the people: the institution crushes the people under weight of rituals, rules, tithes, and land domination. It is also a broader critique of Spanish colonialism and the unbalanced power structure between the colonizers and the indigenous population.

Orozco’s critical and sarcastic attitude is aligned with the political cartoons from publications in Mexican magazines such as La Orquesta and El Ahuizote. For example, the anonymous etching The Cleric is not a Candidate (1904) published in 1904 inEl Ahuizote depicts a disingenuous bishop holding a starving native in his lap like a baby. In the lower section of the image, workers prepare for one of Porfirio Díaz’s rigged reelections, while the bishop tells them to consult him first. Another anonymous lithograph, Where There are Pleasures, There are Pains (1863) published in La Orquesta shares the cynical sentiments of The Franciscan. The anonymous author depicts Napoleon III as Our Lady of Sorrows, however, the Virgin Mary’s iconographic attributes are altered: the memorial candles are two upright cannons, and the ‘pain daggers’ are marked with the different countries he invaded. The daggers marked with the phrase ‘Mexico’ represent the French troops' invasion of Mexico. Orozco, who spent his formative years as an illustrator drawing political cartoons for local magazines was certainly familiar with such cartoons. His early illustrations, like Who Makes him Dance (1911) published in El Ahuizote in 1911, were influenced by the local tradition of political satire and the pollical prints of Mexican printmaker José Guadalupe Posada. While The Franciscan emphasizes broader concepts of human suffering, it still contains elements of Mexican graphic tradition that were important in Orozco’s artistic development.