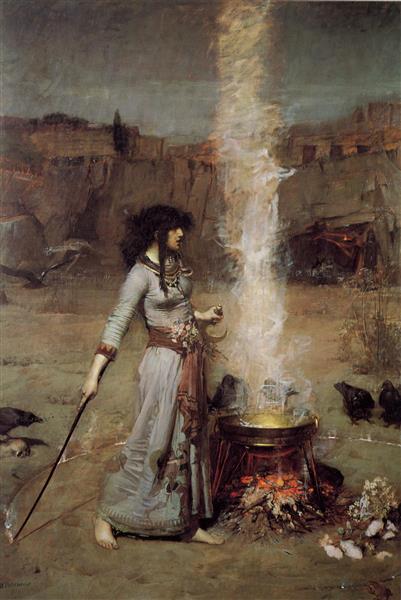 The Magic Circle is an oil painting in the Pre-Raphaelite style, created in 1886 by John William Waterhouse. The painting depicts a witch or sorceress drawing a fiery magic circle on the earth to create a ritual space.

The Magic Circle was shown at the Royal Academy in 1886, and, after Consulting the Oracle and St. Eulalia, was Waterhouse's third exhibit with a supernatural theme in as many years. The painting was well received at its exhibition, and was purchased for £650 the same year by the Tate Gallery, through the Chantrey Bequest. The painting was extremely successful with the critics and public alike.

In a style typical of Waterhouse, the main character is a lone, female figure, placed centrally on the canvas. The surrounding landscape is hazy, as though it is not quite real, and the background figures are only discernible on close inspection, deliberately ensuring the witch is the only image of importance.

Waterhouse paid careful attention to the angles employed in this work, balancing the circle the figure is drawing around herself by the use of a triangle – her straight arm, extended by the straight stick, held out at 25 degrees to her erect body. The witch's power is emphasised by the determined face, by her exclusion of the ravens and frog – popular symbols representing magic – and by her command over the smoke pillar. Instead of billowing outwards or being affected by the wind, it remains in a straight line. A live snake ouroboros loops around the woman's neck.

The Magic Circle is similar in composition to Waterhouse's later picture, Miranda (1916), also a woman associated with magic. The witch wears a similar dress to Miranda and her face can also only be seen in profile. Unlike Frederick Sandys' portrayals of sorceresses, such as his Medea (1868) or Morgan le Fay (1864), Waterhouse chose to make his witch's face intent and intriguing, as opposed to malevolent.

Miracles, magic and the power of prophecy are common themes in Waterhouse's art. More specifically, the notion of woman as enchantress is one that recurs in images such as Circe Offering the Cup to Ulysees (1891, Oldham Art Gallery) and Hylas and the Nymphs (1896, Manchester City Art Gallery). His oeuvre also includes a number of middle-eastern subjects, in which he drew on the work of contemporary artists such as J.F Lewis (1805–76) and Lawrence Alma-Tadema (1836–1912), rather than on actual experience. This is one of Waterhouse's earlier works, and reflects his fascination with the exotic.