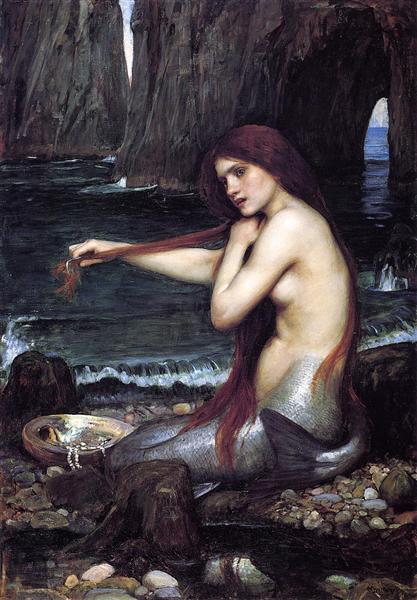 John William Waterhouse presented this painting to the Royal Academy after his election as an Academician. From the 1880s Waterhouse exhibited at the Royal Academy and the New Gallery both complex compositions with many figures as well as single figures often taken from literature or Greek mythology. It is possible that Waterhouse's painting of 'A Mermaid' was inspired by Alfred Lord Tennyson's poem 'The Mermaid' (1830) which includes the lines:
Who would be/
A mermaid fair/
Singing alone/
Combing her hair.

Tennyson's poem goes on to describe the mermaid seeking and finding love among the mermen.

However Waterhouse was also interested in the darker mythology of the mermaid as an enchantress. Mermaids traditionally were sirens who lured sailors to their death through their captivating song. They were also tragic figures as mermaids could not survive in the human world which they yearned for and men could not exist in their watery realm, so any relationship was doomed. In Waterhouse's painting no sailors are depicted so that despite being a 'siren' the mermaid is shown as an alluring rather lonely figure, albeit with a fish tail. The atmosphere evoked is one of gentle melancholy as the mermaid sits alone in an isolated inlet, dreamily combing out her long hair with her lips parted in song. Beside her is a shell filled with pearls, which some believed to be formed from the tears of dead sailors.

When the work was exhibited at the Royal Academy in 1901 the Art Journal noted her 'wistful-sad look' and the review remarked that 'it tells of the human longings never to be satisfied … The chill of the sea lies ever on her heart; the endless murmur of the waters is a poor substitute for the sound of human voices; never can this beautiful creature, troubled with emotion, experience on the one hand unawakened repose, on the other the joys of womanhood'.