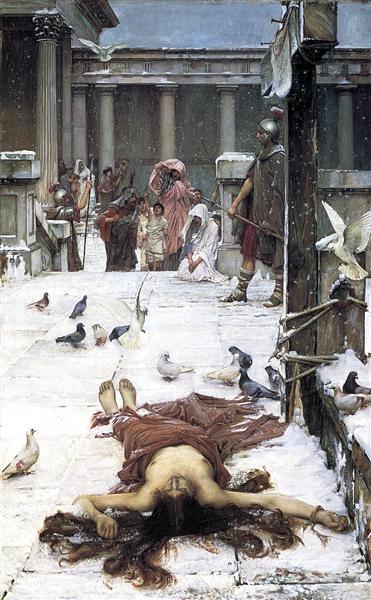 Saint Eulalia is an oil painting on canvas in the Pre-Raphaelite style, created in 1885 by English artist John William Waterhouse, depicting the aftermath of the death of Eulalia of Mérida. It is currently housed at Tate Britain.

A very daring composition, this is one of Waterhouse's most unusual, and consequently most striking, oil paintings. The corpse is dramatically foreshortened, and the snow contrasts with Eulalia’s naked flesh – the 12-year-old girl seems singularly out of place for a Waterhouse picture. His choice of configuration – situating the corpse across the front and leaving so much of the central canvas unoccupied – was risky but it worked: by placing all the background figures in the distance, he concentrated the viewer's gaze on the naked body. The nudity was also groundbreaking for Waterhouse – and something that could have laid him open to criticism – but his sensitive handling of the subject, the youth of the saint, and the historical context of the painting allowed him to escape the critics' pen. The eye is also led to the murdered girl by the angle of the Roman guard's spear, pointing to the ropes that had bound her to the stake.

According to legend, the snow was believed to have been sent by God as a shroud to cover the saint's nakedness; and the dove, seen flying upwards near the crowd of mourners, indicative of Eulalia's soul flying up to Heaven, was said to have flown out of her mouth.