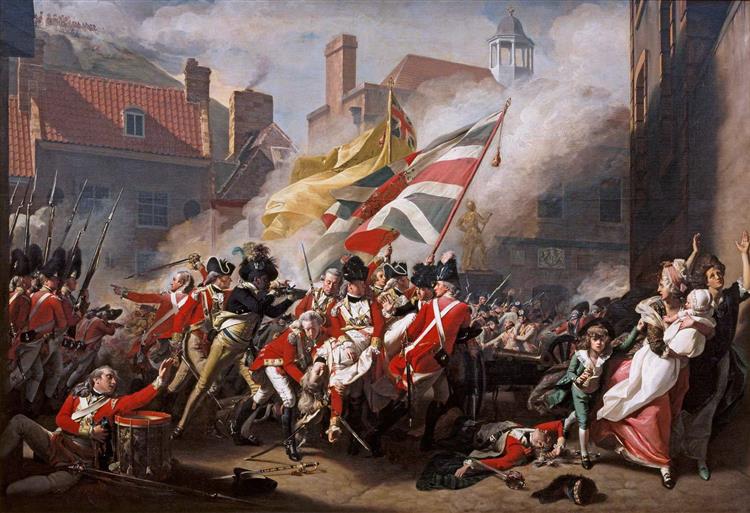 The Battle of Jersey was the last French attempt to seize the island of Jersey, and one of the last battles with invading forces from a foreign nation in the British home islands. The invasion was organised privately by Baron Philippe de Rullecourt but funded and supplied by the French government, and was intended to remove the threat that British naval vessel based in Jersey posed to American ships in the American Revolutionary War.

Approximately 1,000 French soldiers, commanded by de Rullecourt and an Indian, Mir Sayyad, landed at La Rocque, Grouville, overnight on 5–6 January. They occupied St Helier early on the morning of 6 January. They captured the Lieutenant Governor of Jersey, Moses Corbet, in bed. Although Corbet surrendered, Peirson, the 24-year-old commander of around 2,000 troops of the British garrison, refused to surrender. As Peirson organised a counter-attack, a French shot killed him. Lieutenant Philippe Dumaresq of the Jersey militia took command of the British forces, which comprised detachments of the 95th Regiment of Foot, 78th Highlanders, and Jersey Militia. The British forces quickly overwhelmed the French, most of whom surrendered.

John Boydell, a successful engraver and publisher and Aldermen of the City of London, commissioned Copley to paint a large painting, 251.5 centimetres (99.0 in) by 365.8 centimetres (144.0 in). The scene looks towards the final French resistance in Royal Square, viewed along what is now Peirson Place, with the French soldiers taking their last stand around the statue of George II. Further British reinforcements are visible on the hill at the top left. The statue and some of the buildings depicted still stand (some with bullet holes caused by the battle).

Although Peirson was killed in the early stages of the battle, the painting shows Peirson (at the centre of the painting under the large Union Flag, supported by other officers) being shot down leading the final charge, giving him a more heroic role and fate. To the left, his black servant Pompey avenges his master by shooting the sniper. It is believed that the depictions of the officers supporting the stricken Peirson are true portraits; the black servant of auctioneer James Christie was the model for Pompey, although it is unclear whether a black servant played a role (there is no suggestion in contemporaneous sources). Copley modeled the civilians fleeing to the right on his wife, family nurse and children.

Peirson became a national hero, and the painting drew crowds when it was first exhibited at 28 Haymarket in May 1784, with admission charged at 1 shilling. The Tate Gallery purchased the painting in 1864. Between 1989 and 2010, a copy appeared on the 10 Jersey pound note, and before that on the 1 pound note.