{{selectedLanguage.Name}}
Sign In Sign out
Action History
×
Home/ Artists / Neoclassicism .../ John Singleton Copley/ The Death of the Earl of Chatham 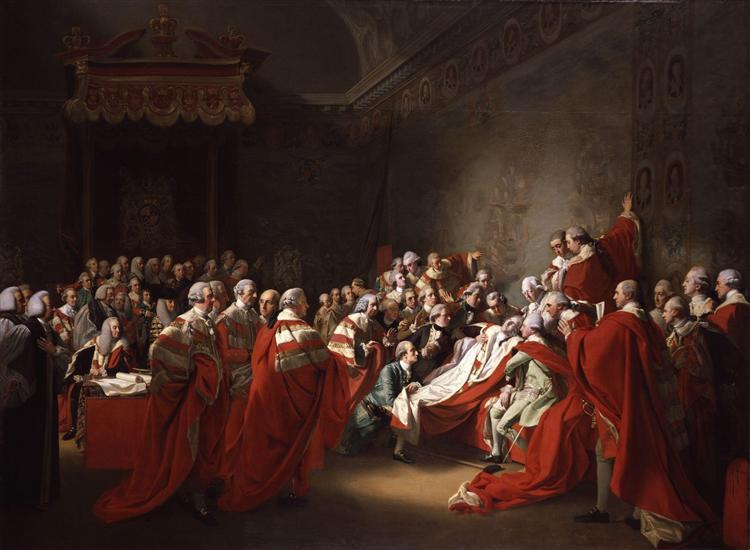 The Death of the Earl of Chatham

The Death of the Earl of Chatham is the title of a 1781 oil-on-canvas painting by Boston-born American artist John Singleton Copley. It depicts the collapse of William Pitt, 1st Earl of Chatham on 7 April 1778, during a debate in the House of Lords on the American War of Independence. Chatham is surrounded by peers of the realm, and the painting contains fifty-five portraits.

Lord Chatham was the architect of the British victory in the Seven Years' War (1757–1763), in which Britain won supremacy in America. Although sympathetic to American grievances and against the use of force to subdue the Americans, he was opposed to American independence.

On 23 March 1778 the Duke of Richmond proposed in the Lords to withdraw all British troops from America. This was defeated by 56 votes to 28. On 5 April he sent Chatham a draft of the Address in which he argued for "entreating his Majesty to dismiss his Ministers, and withdraw his forces, by sea and land, from the revolted provinces...I am willing to hope that differences of opinion were more apparent than real, and arose only from want of opportunities to communicate and to explain." Chatham replied in third person: "It is an unspeakable concern to him, to find himself under so wide a difference with the Duke of Richmond, as between the sovereignty and allegiance of America, that he despairs of bringing about successfully any honourable issue".

Chatham was determined to answer Richmond's motion and so on 7 April he went to the House of Lords, swathed in flannels, supported by crutches and leaning on the arm of his 18-year-old son William Pitt the Younger. Lord Camden wrote to Lord Grafton, describing Chatham as:

Richmond in his speech said that as the Americans could not be defeated they were independent already and that recognising this fact was common sense. Lord Weymouth then spoke for the government. Chatham then rose in his place: "He took one hand from his crutch and raised it, casting his eyes towards heaven...He appeared to be extremely feeble and spoke with that difficulty of utterance which is the characteristic of severe indisposition". Chatham said:

After delivering this speech Chatham suddenly pressed his hand to his heart and fell back in a swoon. The Duke of Cumberland, Lord Temple and other peers, along with Chatham's younger son James Pitt, hastened to assist Chatham. Chatham was then "removed into the Prince's Chamber, and the medical assistance of Dr. Brocklesby, who happened to be in the House, was instantly procured". He was then carried to a house at Downing Street and later that day back to his home at Hayes, Kent. Chatham, aged 69, died there on 11 May.

Technically the title is a misnomer as his death did not take place until 34 days after the collapse portrayed and at home away from the Palace of Westminster.

Copley positions Chatham beneath the tapestries depicting the defeat of the Spanish Armada made by Hendrick Cornelisz Vroom. Chatham's imperial vision of the British Empire resting on commercial expansion via the sea and his collapsing beneath the depiction of England's greatest naval victory are connected and symbolic.