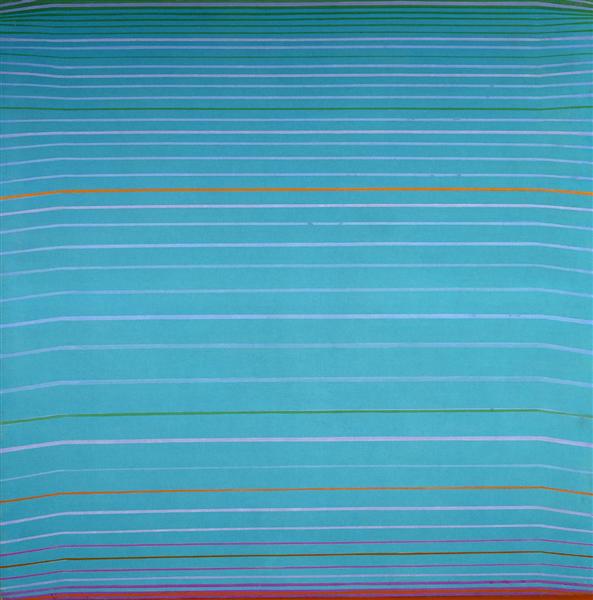 Describing Hoyland's paintings of the period 1960–1 in the catalogue for the 1967 retrospective exhibition at the Whitechapel Gallery (cited above), Bryan Robertson wrote: "In 1960–62, the theme was thin or thick lines, straight or curved, in close or more widely separated alignment, invariably travelling horizontally across a square or just vertical canvas. When the lines are thicker they can more properly be read as bars. The lines are one colour against a contrasting coloured ground; or in two or more colours, light and dark, opposition to the ground. The purpose of these lines is to animate the ground, obviously enough, as well as to divide it into calculated areas - straining towards shapes."

John Hoyland said in 1986 that ‘April 1961’ was painted at a time when he, like many artists of his generation, was trying to come to terms with the impact of American painting - he mentioned that he was particularly impressed by the paintings of Mark Rothko and Barnett Newman. At the time he was teaching a basic design course at Hornsey and was involved with problems of visual perception but was also trying to follow the lead of such painters as Rothko and solve the problem of eliminating traditionally rendered form in his paintings. At this stage he already knew artists pursuing similar lines of investigation (Stroud, Turnbull and Denny had also been involved in the ‘Situation’ exhibition), but he had not, for example, seen a painting by Vasarely.

He remembers that he was concerned to try to make paintings which worked all over the surface but which still retained the possibility of space and illusion. Working with lines he could suggest depth and volume with very simple means or elements. He stressed that the climate within which 'April 1961' and related works were made was one where problems of perception, within the framework of the current art school teaching, were constantly being debated (Newman was also particularly influential in this respect). By 1961, Hoyland was beginning to feel that he was not temperamentally suited to the rigid framework that his work was operating within but still felt the need to react (like many of his contemporaries) against the more painterly excesses of the followers of, for example, de Kooning. However, after this point his work became more direct and full-bodied in its execution and imagery.