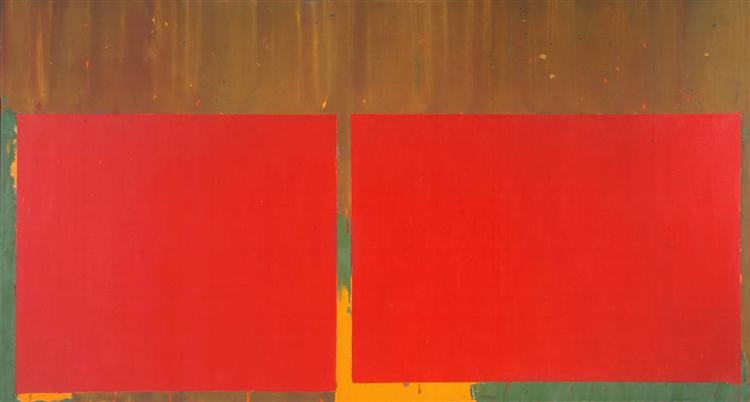 Hoyland has been making large abstract paintings since he graduated from the Royal Academy Schools, London in 1960. Such early paintings as April 1961, made using the traditional materials of oil on canvas, consist of fine coloured lines against a monotone ground and deal with optical issues. In 1963 Hoyland abandoned oil for acrylic and began painting on cotton duck as well as canvas. He had been deeply influenced by the American Abstract Expressionists. At first he identified more closely with the non-gestural artists in this school, Rothko, Newman and Ad Reinhardt, all of whom insisted on grand scale and the elimination of figurative references. He shared with Newman an interest in colour for its emotive force, but was experimenting to find a different framework within which to do this. As he later commented: ‘what my work has always been about from day one ... formal problems, but only as a vehicle for emotions’ (quoted in Moorhouse, p.14). He was also impressed by an exhibition of the abstract ‘pop’ sculptures of Anthony Caro (born 1924) at the Whitechapel Gallery, London in 1963 and shared with the sculptor the desire to create a new abstract language in his medium. The formal problems he concentrated on stem from the same issues traditional to figurative painting – composition, drawing, space, colour and technique. Colour and space were to take precedence in Hoyland’s work; he rejected the modernist insistence on the flat reality of the picture plane and used colour to create a sense of virtual illusory space. He has explained: "Colour is used instinctively, not intellectually. But once an instinctive choice is made, the colour tends to be played through as a long sequence. Where to put colour is the crucial question and decision, and always the problem ... if you have a rectangle it is interesting to add to it, to enrich and complicate the area by giving an independent life to shapes inside it and not allow them to be endlessly restricted by their unification with the over-all picture plane." (Quoted in John Hoyland: Paintings 1960-67, p.14.)

17.3.69, like the majority of Hoyland’s works of the 1960s, is a large horizontal painting. He always paints the canvas on the wall (rather than the floor), occasionally rotating it to allow the paint to flow vertically towards the top. From 1964 until the end of the decade, red and green predominated as the background colour. 17.3.69 is dominated by two large blocks of monotone red. They are set into narrow margins of uneven green, yellow and brown. The brown forms a wider band along the top of the painting, extending approximately a quarter of the way down. During the mid 1960s Hoyland developed a method of applying thin washes of paint to the canvas which resulted in some areas appearing watery and translucent. These are typically combined with rectangles, squares or strips of colour applied as a creamy, smooth skin of paint resting on top of the thinner paint. The two blocks of red in 17.3.69 are areas of dense paint, sitting on top of the more watery background colours. They reach the same height as each other but the block on the left extends slightly lower, or closer to the bottom edge of the painting, than the block on the right which is wider. This inequality and the balancing of green along the left side and the bottom right create a strong visual dynamic which draws the eye around the painting. The work’s large scale enhances the sense of enveloping space, created by the watery areas of brown filled with the quasi-sculptural blocks of red colour.

The painting’s title, 17.3.69, refers to the date on which it was completed. The use of a date as title has diaristic resonances, suggesting an element of personal expression at odds with the numerical code and the controlled, abstract composition. 25.4.69 (Tate T01129) is a large vertical painting made, as its title indicates, the following month. (Elizabeth Manchester)