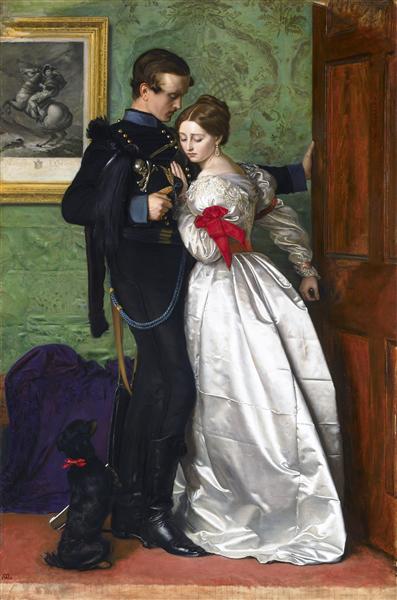 The painting depicts a Brunswicker about to depart for battle. His sweetheart, wearing a ballgown, restrains him, trying to push the door closed, while he pulls it open. This suggests that the scene is inspired by the Duchess of Richmond's ball on 15 June 1815, from which the officers departed to join troops at the Battle of Quatre Bras.

In a letter to his wife, Effie Gray, Millais described his inspiration for the work, referring to a conversation with William Howard Russell, the war correspondent of The Times:

The same letter states that he intends it to be "a perfect pendant to The Huguenot", Millais's first major success, which portrays a similar scene featuring two lovers gazing at each other longingly. Originally Millais intended the two paintings to be even more similar than they are by repeating the motif of the armband used in the earlier painting. He wanted the soldier to be wearing a black crepe mourning armband, with "the sweetheart of the young soldier sewing it around his arm". The armband idea was quickly dropped as it does not appear in any extant preparatory drawings.

Millais reduced the presence of Napoleon to an engraving after Jacques-Louis David's Napoleon Crossing the Alps, which is framed on the damask-hung wall, and which "perplexed the critics with the possible intricacies of cross purposes and rival jealousies" according to the reviewer from Blackwood's Edinburgh Magazine. This refers to the fact that some critics took the print to imply that the female character was an admirer of Napoleon, and so she was trying to prevent her lover from joining the army for both personal and political reasons. As the critic of The Times surmised, "her reluctance is due in part to a romantic admiration for this great conquerer." Other critics suggest the print was intended to allude to both the Waterloo campaign and to more recent events, particularly Napoleon III's repetition of his predecessor's crossing of the Alps by his attack on Austrian-controlled Lombardy in 1859.

The artwork took an estimated three months to paint. Millais is reported to have paid particularly close attention to the correctness of the Brunswicker's uniform. Kate Perugini, the daughter of Charles Dickens, was used as a model for the woman seen in the picture. The male model was an anonymous soldier who died shortly afterwards. The two models never actually met. Millais' son says that they both posed with wooden props. He "clasped a lay-figure to his breast, while the fair lady leant on the bosom of a man of wood."

It was also bought for the highest price Millais had ever received from dealer and publisher Ernest Gambart—100 guineas. He sold it on to the well-known Pre-Raphaelite collector Thomas Plint. Later, in 1898, William Hesketh Lever purchased the work for his private collection.