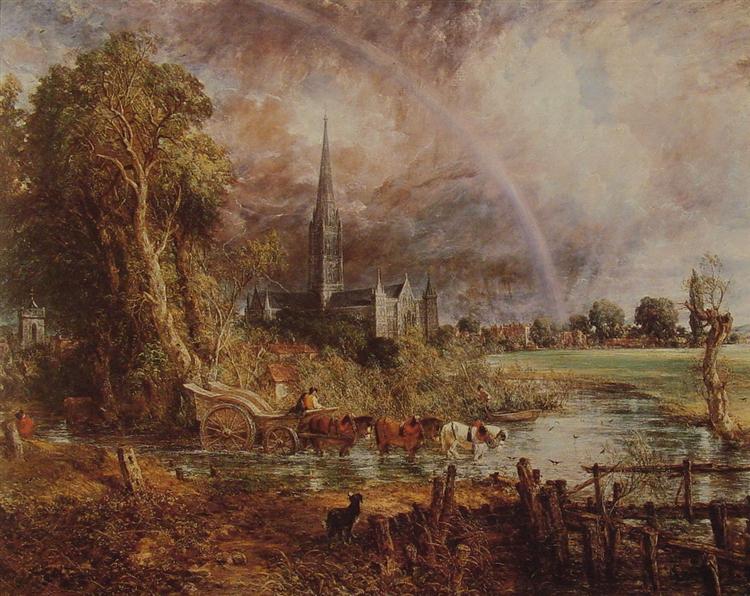 Salisbury Cathedral from the Meadows

Salisbury Cathedral from the Meadows was painted by John Constable in 1831, one year after the death of his wife, Maria. It is currently on display in Edinburgh at the Scottish National Gallery. He later added nine lines from The Seasons by the eighteenth-century poet James Thomson that reveal the painting's meaning: That the rainbow is a symbol of hope after a storm that follows on the death of the young Amelia in the arms of her lover Celadon. Constable exhibited this painting at the Royal Academy in 1831, but continued working on it during 1833 and 1834.

This painting was a personal statement of his turbulent emotions and his changing states of mind. The sky reflects this turbulence and shows his emotional state of being.

Possible political meanings have been attributed to it, one of which being the clash of industrialization and nature represented through the clash of elements.

Some symbolism in this painting includes:

The acquisition was part of Aspire, a partnership between Tate and four other national and regional galleries - Amgueddfa Cymru - National Museum Wales, the National Galleries of Scotland, Colchester and Ipswich Museums Service and Salisbury and South Wiltshire Museum. This partnership will enable the work - which was acquired with major grants and donations from the Heritage Lottery Fund, the Art Fund (including a contribution from the Wolfson Foundation), The Manton Foundation, and Tate Members - and to go on "almost constant" view, ensuring that it will stay in the UK. Each display will be complemented by an education programme which will encourage audiences to learn more about this painting and the work of John Constable.