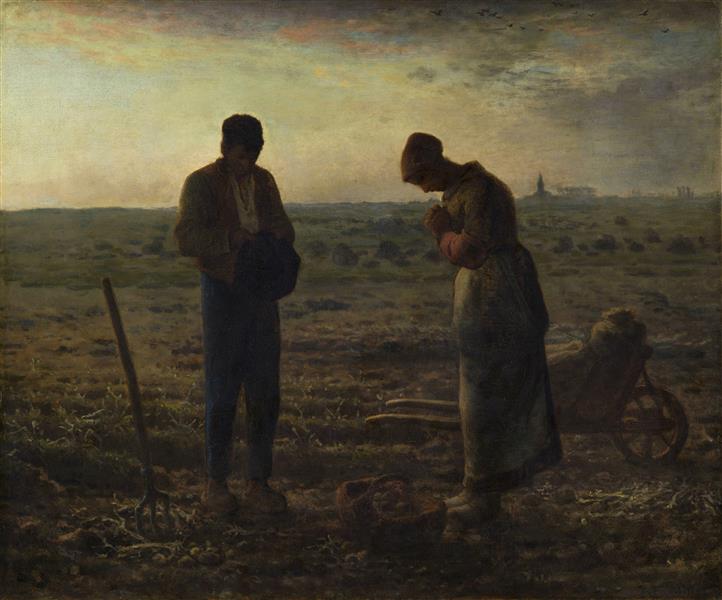 Millet had originally created this work for an American, Thomas Gold Appleton, who failed to take possession of the piece. Millet later changed the painting to include a steeple in the background and change the name from Prayer for the Potato Crop to The Angelus. The painting changed hands many times, ending with a bidding war between France and America. The painting has also been a source of speculation, due to Salvador Dali’s insistence that the figures are actually praying over their deceased child. Dali was so insistent that the painting was eventually x-rayed, revealing a shape that looked like a small coffin, indicating that Dali may have been right, and that Millet may have originally created the painting with the couple mourning over their small child’s coffin.

The Angelus (L'Angélus) is an oil painting by French painter Jean-François Millet, completed between 1857 and 1859.

The painting depicts two peasants bowing in a field over a basket of potatoes to say a prayer, the Angelus, that together with the ringing of the bell from the church on the horizon marks the end of a day's work.

Millet was commissioned by the American would-be painter and art collector Thomas Gold Appleton, who never came to collect it. The painting is famous today for driving the prices for artworks of the Barbizon school up to record amounts in the late 19th century.

Millet said: "The idea for The Angelus came to me because I remembered that my grandmother, hearing the church bell ringing while we were working in the fields, always made us stop work to say the Angelus prayer for the poor departed". Completed between 1857 and 1859, it is an oil painting on canvas. When Appleton failed to take possession, Millet added a steeple and changed the initial title of the work, Prayer for the Potato Crop, to The Angelus.

It depicts two peasants during the potato harvest in Barbizon, with a view of the church tower of Chailly-en-Bière. At their feet is a small basket of potatoes, and around them a cart and a pitchfork. Various interpretations of the relationship between the two peasants have been made, such as colleagues at work, husband and wife pair, or (as Gambetta interpreted it) farmer and maidservant. An 1889 sales catalogue described them simply as "a young peasant and his companion". Millet sold The Angelus after his The Gleaners was sold at the Salon in 1857. About half the size, it brought him less than half the amount he sold The Gleaners for. The Angelus was eventually shown the year before Millet's death in Brussels in 1874, where it was greatly admired by Léon Gambetta.

Much later, Salvador Dalí saw a print of this painting in his school and insisted that this was a funeral scene, not a prayer ritual and that the couple were portrayed praying and mourning over their dead infant. Although this was an unpopular view, at his insistence the Louvre X-rayed the painting, showing a small painted-over geometric shape strikingly similar to a coffin by the basket. It seems possible that Millet originally painted a burial – perhaps a rural version of Courbet's famous painting A Burial at Ornans (1850) – but then converted it to a recitation of the Angelus, complete with a visible church bell tower.

At first, the painting was interpreted as a political statement, with Millet viewed as a socialist in solidarity with the workers. While the painting expresses a profound sense of religious devotion, and became one of the most widely reproduced religious paintings of the 19th century, with prints displayed by thousands of devout householders across France, Millet painted it from a sense of nostalgia rather than from any strong religious feeling. According to Karine Huguenaud, "There is, however, no religious message to the painting: Millet was simply concerned with portraying a ritualised moment of meditation taking place as the dusk rolls in." In 1864 Belgian minister Jules Van Praët exchanged it for Millet’s Bergère avec son troupeau (Shepherd and his flock) and commented dryly, “What can I say? It is clearly a masterpiece, but faced with these two peasants, whose work is interrupted by prayer, everyone thinks they can hear the nearby church bell tolling, and in the end, the constant ringing just became tiresome”.