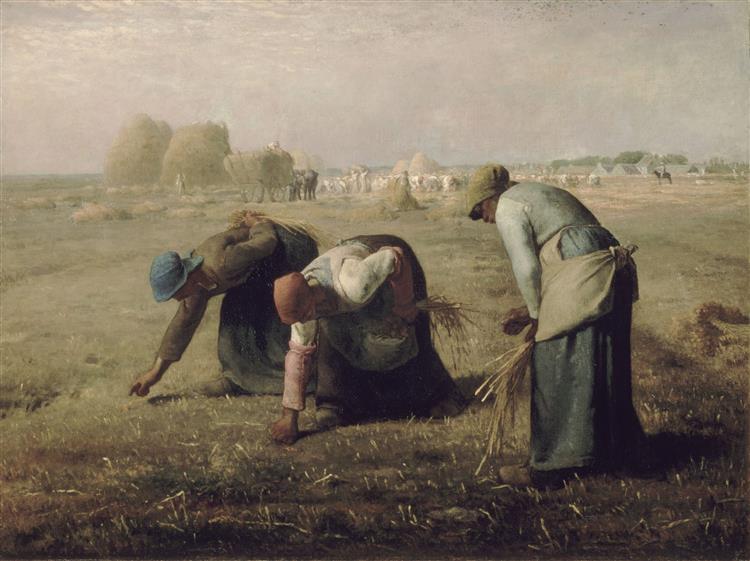 By far the most recognizable of Millet’s works, The Gleaners depicts a trio of women gleaning the last bits of wheat from a field. Millet found the theme of women gleaning the last bits of wheat an eternal one, linked to stories of the Old Testament. The painting was received by the public with open scorn. It presented what at the time were the lowest ranks of society, taking advantage of the age-old right to remove the last bits of grain left over from wheat harvest, in a sympathetic light. During his lifetime, this painting garnered naught but notoriety from a French upper-class that feared glorifying the lower ranks of society, and it was not until after the artist’s death that it became more popular.

The Gleaners (Des glaneuses) is an oil painting by Jean-François Millet completed in 1857.

It depicts three peasant women gleaning a field of stray stalks of wheat after the harvest. The painting is famous for featuring in a sympathetic way what were then the lowest ranks of rural society; this was received poorly by the French upper classes.

Millet's The Gleaners was preceded by a vertical painting of the image in 1854 and an etching in 1855. Millet unveiled The Gleaners at the Salon in 1857. It immediately drew negative criticism from the middle and upper classes, who viewed the topic with suspicion: one art critic, speaking for other Parisians, perceived in it an alarming intimation of "the scaffolds of 1793." Having recently come out of the French Revolution of 1848, these prosperous classes saw the painting as glorifying the lower-class worker. To them, it was a reminder that French society was built upon the labor of the working masses, and landowners linked this working class with the growing movement of Socialism. The depiction of the working class in The Gleaners made the upper classes feel uneasy about their status. The masses of workers greatly outnumbered the members of the upper class. This disparity in numbers meant that if the lower class was to revolt, the upper class would be overturned. With the French Revolution still fresh on the minds of the upper classes, this painting was not perceived well at all.

Millet's The Gleaners was also not perceived well due to its large size, 33 inches by 44 inches, or 84 by 112 centimetres. This is huge for a painting depicting labor. Normally this size of a canvas was reserved for religious or mythological style paintings. Millet's work did not depict anything religiously affiliated, nor was there any reference to any mythological beliefs. The painting illustrated a realistic view of poverty and the working class. One critic commented that "his three gleaners have gigantic pretensions, they pose as the Three Fates of Poverty...their ugliness and their grossness unrelieved." While the act of gleaning was not a new topic—representations of Ruth had existed in art—this new work was a statement on rural poverty and not Biblical piety: there is no touch of the Biblical sense of community and compassion in the contrasting embodiments of grinding poverty in the foreground and the rich harvest in the sunlit distance beyond. The implicit irony was unsettling. After the Salon, Millet, short on money, sold his piece for 3,000 francs—below his asking price of 4,000—after haggling with an Englishman named Binder who would not budge for his meagre counter-offer; Millet tried to keep the miserable price a secret. While The Gleaners garnered little but notoriety during his life, after his death in 1875, public appreciation of his work steadily broadened. In 1889, the painting, then owned by banker Ferdinand Bischoffsheim, sold for 300,000 francs at auction. The buyer remained anonymous, but rumours were that the painting was coveted by an American buyer. It was announced less than a week later that Champagne powerhouse Jeanne-Alexandrine Louise Pommery had acquired the piece, which silenced gossip on her supposed financial issues after leaving her grapes on the vines weeks longer than her competitors.