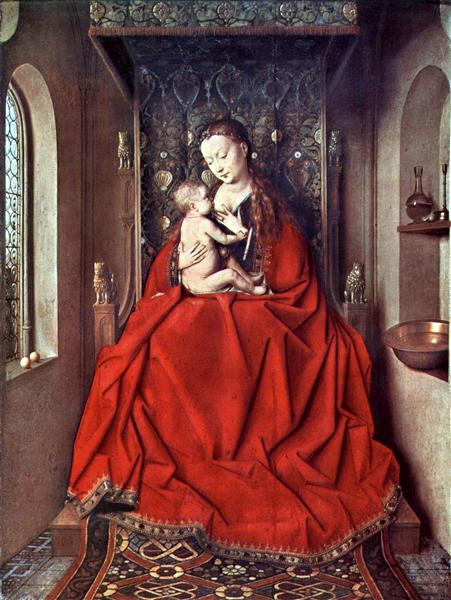 The Lucca Madonna is a 1436 oil painting of the Madonna and Child by the Early Netherlandish master Jan van Eyck. It shows Mary seated on a wooden throne and crowned by a canopy, breastfeeding the infant Christ. Its carpentry suggests it was once the inner panel of a triptych, while its small size indicates it was meant for private devotion. The painting is in the collection of the Städel Museum, Frankfurt.

It is known as Lucca Madonna as it belonged to the collection of Charles II, Duke of Parma and Lucca in the early 19th century. It is one of the latest works by Jan van Eyck. The Virgin has been identified as a portrait of the painters's wife, Margaretha, of whom van Eyck also made a secular portrait.

The Virgin sits on a throne with four small lion statues, a reference to the throne of Solomon which had twelve lions on the sides and steps. The iconography mixes the earlier style of the "Nursing Madonna" with the "Throne of Wisdom". As the Speculum Humanae Salvationis put it: "the throne of the true Solomon is the most Blessed Virgin Mary, In which sat Jesus Christ, the true wisdom."

As in many paintings by van Eyck and his contemporaries, this comparison is further elaborated by specifically depicting Mary similar to an altar, in that she supports the infant Christ on her lap, shown oversized and flattened, just as the altar supports the presence of Christ in the host at Mass. The white cloth beneath him, over the richer coloured cloth of Mary's dress, and the niche to the right which resembles a piscina where water for the priest to wash his hands was kept, all contribute to the comparison. The unusual shape of the room, very narrow for such a large chair, suggests a small chapel.

The two fruits on the windowsill have not been positively identified, but they are either apples or oranges, both of which would be allusions to paradise. The right side wall is a mirror image to the window, while a shelf contains empty candlestick and a half-filled glass carafe, or flask. There is a large bowl or sink on the lower ledge. The floor tiles are formed from blue and white, geometrical patterns, mostly covered by the carpet centered around the base of the throne.

The Lucca Madonna is one of six extant Madonna paintings by van Eyck that are dated to the period between his completion of the Ghent Altarpiece and his death in June 1441. These are: