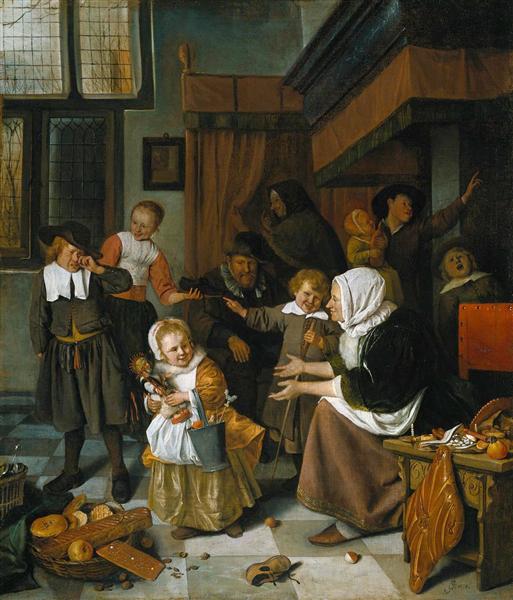 The Feast of Saint Nicholas (Dutch: Het Sint-Nicolaasfeest, c. 1665–1668), is a painting by Dutch master Jan Steen, which can now be found in the Rijksmuseum in Amsterdam. It measures 82 x 70.5 cm. The picture, painted in the chaotic Jan Steen "style," depicts a family at home on December 5, the night celebrated in the Netherlands as the Feast of Saint Nicholas, or Sinterklaas.

The focal point of the painting is the youngest daughter of the family, a golden-child, painted, in fact, in a golden smock and showing golden locks. She has behaved all year, and Saint Nicholas has rewarded her by stuffing her shoe with a doll and other treats, which she carries in her bucket. She is in stark contrast to her elder brother, standing to her right, who is sobbing, while another brother looks on, laughing. Apparently, the elder brother has been naughty, and his shoe, held up by an elder sister behind him, was left empty. Still there is hope for the sobbing boy. Hidden in the background, almost obscured by the draperies, his grandmother seems to beckon to him—perhaps she is hiding a gift for him too, behind the heavy curtains. While the mother attempts to coax the golden girl to show her the gifts she received, the father, seated in the center of the painting, seems to smile as he remembers his own childhood on this festive night. Further to the right a child can be seen holding a baby and pointing up the chimney, while a younger child looks on in amazement, as he has probably just been told that this was Sinterklaas' method of gaining entry to the house.

Jan Steen was a Dutch genre painter of the 17th century, Dutch painting of the time, including the landscapes of Aelbert Cuyp and Jacob van Ruisdael which show a unique rustic intimacy that carried over into genre paintings of domestic scenes. The paintings of Jan Vermeer and Jan Steen detail the same sense of tranquility and comfort in scenes from daily household life. As the Dutch economy thrived and the middle class of wealthy merchants grew, such domestic paintings rose in popularity. As members of the Middle-Class became the new patrons of art, the traditional religious and historical subjects were less popular than the newer household scenes that offer direct glimpses into the lives of Dutch families of the time. Jan Vermeer focused primarily on scenes with women in idyllic settings. Jan Steen, using the same style and subject chose instead domestic scenes that show a less perfected, and perhaps more realistic picture of daily life in the Netherlands.

Jan Steen falls in the greater category of the Baroque period in painting. Baroque painting in the Netherlands was different from that in other countries in that it did not have the same idealized finery and magnificent grandeur. Instead, the Dutch style can be identified by its focus on extreme detail and realism, different even from neighboring Flanders and the splendid Flemish baroque paintings.

Pictorial Light: As they strove for extreme realism, Dutch Golden Age painters mastered the art of depicting the quality of light, particularly concentrating on the way that it behaved and reflected on various surfaces. Some Dutch artists used tools like the camera obscura to help them compose their paintings with more perfect perspective.