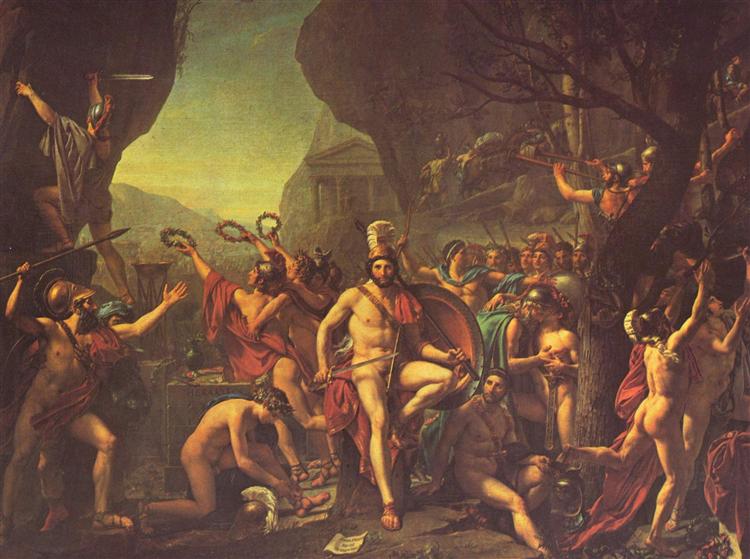 Leonidas at Thermopylae is an oil on canvas painting by French artist Jacques-Louis David. The work currently hangs in the Louvre in Paris, France. The massive painting has the dimensions of about thirteen feet by seventeen and a half feet and was completed in 1814. The convoluted piece took David almost fifteen years to complete, with him separating his work into two periods from 1799 to 1803 and 1813-1814. Leonidas at Thermopylae was purchased, along with The Intervention of the Sabine Women, in November of 1819 for 100,000 francs by Louis XVIII, the king of France at the time. The piece shows the Spartan king Leonidas prior to the Battle of Thermopylae. David's pupil Georges Rouget collaborated on it.

The crowded and theatrical scene that David depicts takes place in a time of war, seemingly in Greece from the Greek temple and temperate mountains in the background. The war we see is the Battle of Thermopylae, which took place in 480 B.C. Thermopylae, which is a Greek word that means “hot gates,” was chosen to be the perfect place for this battle because of its mountainous geography and narrow passageway. This helped the Greeks hold a better stand against the Persians who were invading the area. King Leonidas, the Spartan leader, “delayed the invasion of Darius I and the Persians…by sacrificing himself and his men to give the Greeks the time they needed to organize an ultimately victorious resistance” in the long run. While this act of bravery and sacrifice by King Leonidas and his three hundred soldiers proved to be a defeat at the time, it inspired David during France’s own internal war.

When David painted Leonidas at Thermopylae, France was experiencing the fall of the First French Empire under Napoleon Bonaparte. David felt that France needed a hero to sacrifice himself for the greater good of his country, and the story of Leonidas and the Battle of Thermopylae inspired him. This was all taking place during the French Revolution where enemy soldiers were closing in on the French borders; these events are similar to how the Spartans felt during the Battle at Thermopylae, the core theme of David’s painting.

When Napoleon Bonaparte saw the exhibit of David’s latest paintings in 1799, “he criticized the lack of action and the fixed poses of the warriors in The Sabine Women.” This critique by one of David’s heroes compelled David to return to what he thought of as the Academy’s primary principles, Greek classical art. This masterpiece is one in which fully features not only the principles, but also the Greek subjects to convey the heroic nature of this historical battle.

David made many sketches before the final oil on canvas composition was executed. A sketch dating back to 1814 is a compositional study that was completed in two separate parts, leaving the final result somewhat choppy and overworked. There are a few differences between this compositional study and the final painting, one of which being a more full view of the background which resulted from the removal of trees and branches from the earlier sketch. Classical male figures were included from the beginning of David's sketches for Leonidas at Thermopylae.