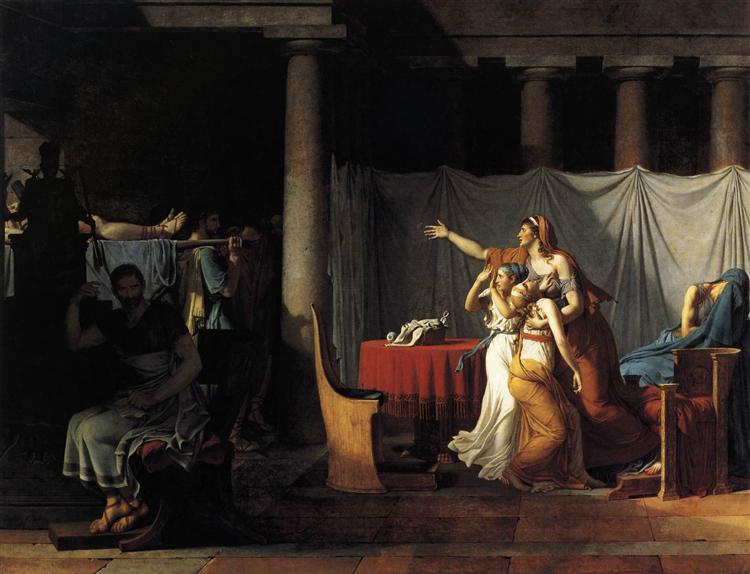 Lictors Bearing to Brutus the Bodies of his Sons

The Lictors Bring to Brutus the Bodies of His Sons (French: Les licteurs rapportent à Brutus les corps de ses fils) is a work in oils by the French artist Jacques-Louis David. On a canvas of more than twelve square feet, this painting was first exhibited at the Paris Salon in 1789. The subject is the Roman leader Lucius Junius Brutus, founder of the Roman Republic, contemplating the fate of his sons. They had conspired to overthrow the republic and restore the monarchy, and Brutus himself was compelled to order their deaths. In doing so, Brutus became the heroic defender of the republic, at the cost of his own family. The painting was a bold allegory of civic virtue with immense resonance for the growing cause of republicanism. Its themes of virtue, sacrifice, and devotion to the nation sparked much controversy when it was unveiled in the politically charged era of the French Revolution.

David labored over the painting for more than two years before he considered it complete. His attachment to the motif of Brutus had been evident for years before this painting, at least since the early 1780s when he was making The Oath of the Horatii (1784). This earlier work bears a distinct connection to Brutus through the themes of duty, loyalty, and virtue. The oath itself was an element of the Brutus legend which David artistically transposed to the Horatii. Similar license was taken with the composition of Brutus: the return of the sons' bodies is an episode not found in the accounts of Livy and Plutarch.

David's enthusiasm for the republican cause, at least at this early stage, is a matter of dispute. Many historians believe his painterly inspirations were more prosaic, drawn from standard classical history lessons and lesser events of contemporary notoriety. In spite of its quick apotheosis by the public, some contemporaries questioned the personal intentions of David regarding this work, and the debate remains unresolved.

Like most of David's works, Brutus is on a large canvas. It measures 323 centimetres (127 in) in height and 422 centimetres (166 in) in width. The style of painting is in the Neoclassical manner. Brutus sits on a klismos on the left, alone and brooding; to the right, his wife holds their two horrified daughters, while a servant on the far right quakes in anguish.

Note Brutus' tense crossed feet in the picture, the sharp scissors that lay dead in the center of the painting, and the use of light and dark to draw a distinction between Brutus and his wife. Brutus does not even look back as his headless sons are brought into the room.

The name is frequently rendered in English as Brutus Receiving the Bodies of His Sons, among other variations, including Brutus and His Dead Sons and simply Brutus. The complete original name as presented to the Salon was much lengthier and more explicative. It too has been rendered in various forms, but as translated from the small Salon guidebook (livret) offered in 1789, it reads, with poignancy in the first year of the Revolution, as: Brutus, first consul, returned to his house after having condemned his two sons who had allied themselves with the Tarquins and conspired against Roman liberty; the lictors return their bodies so that they may be entombed.