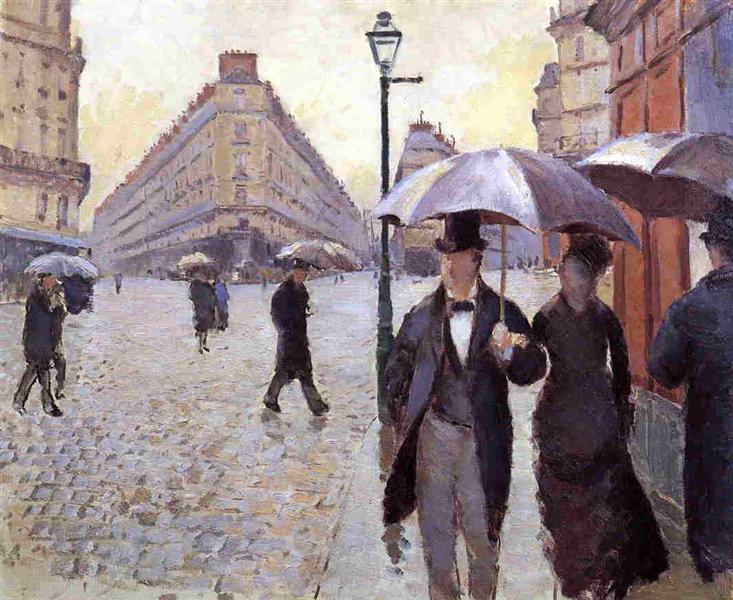 Paris Street; Rainy Day (French Rue de Paris, temps de pluie) is a large 1877 oil painting by the French artist Gustave Caillebotte (1848–1894), and is his best known work. It shows a number of individuals walking through the Place de Dublin, in 1877 known as the Carrefour de Moscou, at an intersection to the east of the Gare Saint-Lazare in north Paris. Although Caillebotte was a friend and patron of many of the impressionist painters, and this work is part of that school, it differs in its realism and reliance on line rather than broad brush strokes.

Caillebotte's interest in photography is evident. The figures in the foreground appear "out of focus", those in the mid-distance (the carriage and the pedestrians in the intersection) have sharp edges, while the features in the background become progressively indistinct. The severe cropping of some figures – particularly the man to the far right – further suggests the influence.

The first showing of the painting was at the Third Impressionist Exhibition of 1877. It currently is owned by the Art Institute of Chicago. AIC curator Gloria Groom described the work as "the great picture of urban life in the late 19th century."

The tone of the light indicates that the painting is set on a wintery afternoon, and the two main figures walk underneath an umbrella. They are dressed in the height of contemporary Parisian fashion. She wears a hat, veil, diamond earring, demure brown dress, and a fur lined coat, described in 1877 as "modern – or should I say, the latest fashion". The man wears a moustache, topcoat, frock coat, top hat, bow tie, starched white shirt, buttoned waistcoat and an open long coat with collar turned up. They are unambiguously middle class, yet some working class figures may be seen in the background; a maid in a doorway, the decorator carrying a ladder, cut-off by the umbrella above him. Caillebotte juxtaposes the figures and the perspective in a playful manner, with one man appearing to jump from the wheel of a carriage; another pair of legs appear below the rim of an umbrella.

The painting does not present a convivial mood. The figures seem mostly isolated, and their expressions are largely downcast. They appear to hurry rather than stroll through the streets, absorbed in their own thoughts. The umbrellas shield them, in the words of Rose-Marie Hagen, "not just from the rain, but, also it seems, from other passers by". Characteristic of the positioning of the figures, the heads and eyes of the main couple are faced away from the man approaching them from their right. Hagen believes that given their close quarters, they will both be unable to comfortably step out of the man's way, but also their averted gaze applies equally to the viewer, who looks from a perspective equal to us. Caillebotte reproduces the effect of a camera lens in that the points at the center of the image seem to bulge. He also recreates the focusing effect of the camera in the way that it sharpens certain subjects of an image, but not others. The same purpose is seen in the overall clarity of the image. The foreground is in focus, but slightly smudged; the middle ground has sharp, clear edges and well defined subjects, and the background fades into the distance, becoming more and more blurry the farther back the eye travels. He makes the middle ground section more clear, mimicking the effect of a camera.