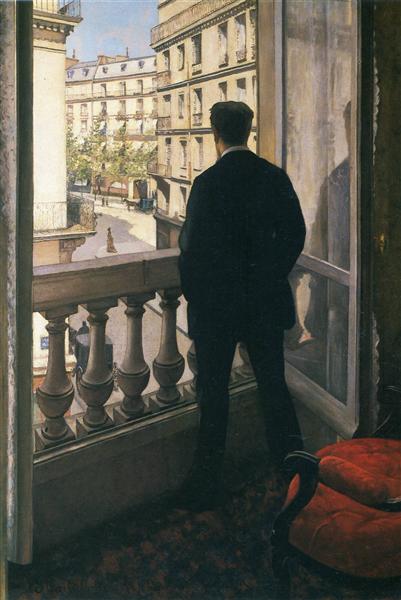 Man at the Window

The painting depicts the artist's brother, René Caillebotte, wearing informal clothes and standing at a balcony. He is standing at a window from the family home in the Rue de Miromesnil in Paris, looking outwards into Boulevard de Malesherbes (the large, oblique cross-street in the background). It is a comparatively early work in Caillebotte's oeuvre and reveals his interest in urban Realism.

In its theme of a figure seen from behind at an open window, the composition has precedents in German Romanticism, a notable example being Caspar David Friedrich's Woman at the Window (1822). Other examples include Goethe at the Window of His Room in Rome (1787) by Johann Heinrich Tischbein and The Morning Hour (1857–60) by Moritz von Schwind.

Caillebotte's painting differs from his German antecedents in several ways, however. The man does not gaze upon nature, but rather looks out upon an urban scene. According to the art historian Kirk Varnedoe, "a standard charm of the window view is our bemused curiosity as to what the observer is looking at; but Caillebotte's structure replaces this curiosity with something quite different." By placing the onlooking man off-center and depicting him from a somewhat elevated viewpoint, Caillebotte's painting creates a tense relationship between the dominant foreground figure, the emphatic perspectival diagonals, and the detailed street scene beyond. Varnedoe says "the normal interior-exterior oppositions of the window are thus combined in a charged relationship, competitive or covalent, that is seemingly unprecedented".

Caillebotte presented this painting at the Impressionism exhibition of 1876 alongside a few of his other works, including Les raboteurs de parquet. Writer Émile Zola was impressed with technical achievement of the works, but was not enthusiastic about the style: "Photography of reality which is not stamped with the original seal of the painter's talent—that's a pitiful thing." He called the painting "anti-artistic... because of the exactitude of the copying."