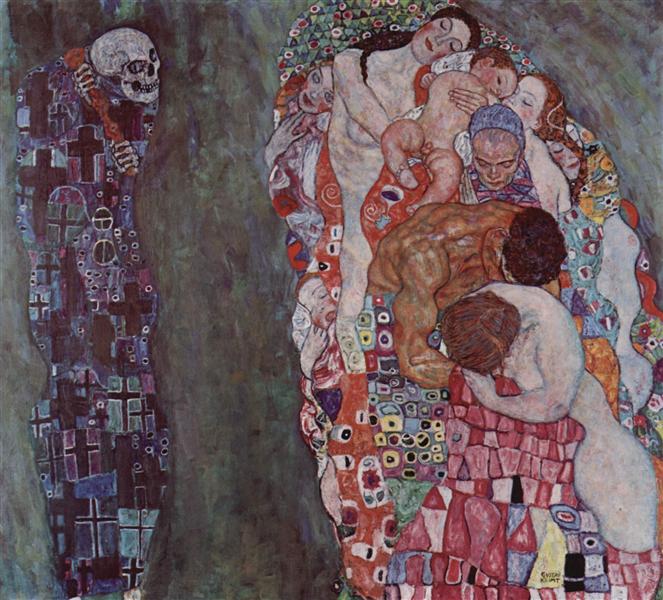 Death and Life (Italian: Morte e Vita) is an oil on canvas painting by Austrian symbolist painter, Gustav Klimt whose primary subject was the female body. His paintings, murals, and sketches are marked by a sensual eroticism, which is especially apparent in his pencil drawings. The painting was started in 1908 and completed in 1915. It is created in an Art Nouveau (Modern) style by use of allegorical painting genre during Golden phase. The painting measures 178 by 198 centimeters and is now housed at the Leopold Museum in Vienna.

This is one of Klimt’s central themes, central also to his time and to his contemporaries among them Edvard Munch and Egon Schiele. Klimt makes of it a modern dance of death, but unlike Schiele, he introduces a note of hope and reconciliation, instead of feeling threatened by the figure of death, his human beings seem to disregard it. The imagination of the artist is focused no longer on physical union, but rather on the expectation that precedes it. Perhaps this new found serenity is rooted in Klimt’s own awareness of aging and closeness to death. But before the moment came when he chose to depict nothing more than moments of intense pleasure or miraculous beauty and youth.