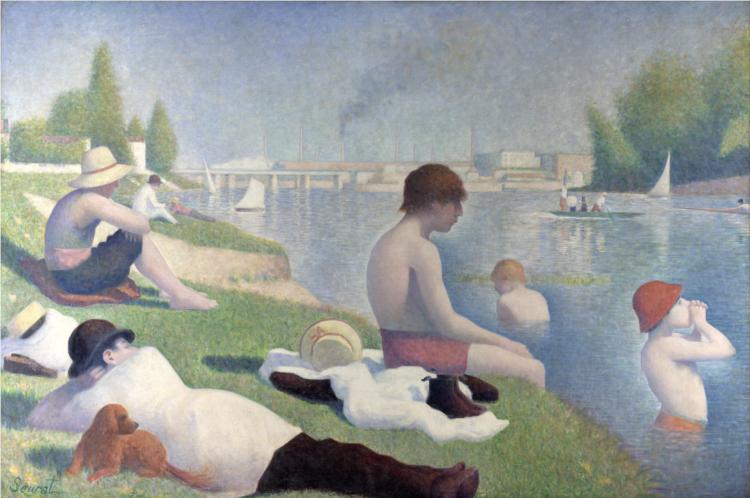 Bathers at Asnières (French: Une Baignade, Asnières) is an oil-on-canvas painting by the French artist Georges Pierre Seurat, the first of his two masterpieces on the monumental scale. The canvas is of a suburban, but placed Parisian riverside scene. Isolated figures, with their clothes piled sculpturally on the riverbank, together with trees, austere boundary walls and buildings, and the River Seine are presented in a formal layout. A combination of complex brushstroke techniques, and a meticulous application of contemporary colour theory bring to the composition a sense of gentle vibrancy and timelessness.

Seurat completed the painting of Bathers at Asnières in 1884, when he was twenty-four years old. He applied to the jury of the Salon of the same year to have the work exhibited there, but the jury rejected it. The Bathers continued to puzzle many of Seurat’s contemporaries, and the picture was not widely acclaimed until many years after the death of the artist at the age of just thirty-one. An appreciation of the painting’s merits grew during the twentieth century, and today it hangs in the National Gallery, London, where it is considered one of the highlights of the gallery’s collection of paintings.

The spot depicted is just short of four miles from the centre of Paris. It is in fact the case that the figures on the river-bank are not in the commune of Asnières, but are rather in Courbevoie, the commune bordering Asnières to the west. The bathers themselves are in the River Seine. The slope forming most of the left hand side of the painting was known as the Côte des Ajoux, near the end of the rue des Ajoux, on the north bank of the river. Opposite is the island of la Grande Jatte, the east tip of which is shown as the slope and the trees to the right, and which Seurat has pictorially extended beyond its actual length. The Asnières railway bridge, and the industrial buildings of Clichy are in the background. Locations such as this one were sometimes shown on French nineteenth century maps as Baignade (or, ‘bathing area’).

Many artists painted canvases from this stretch of the Seine during the 1880s. As well as the Bathers, some of Seurat’s better known works to come from the vicinity include his The Seine at Courbevoie, A Sunday Afternoon on the Island of La Grande Jatte, and The Bridge at Courbevoie.

Seurat uses a variety of means to suggest the baking heat of a summer’s day at the riverside. A hot haze softens the edges of the trees in the middle-distance and washes out colour from the bridges and factories in the background—the blue of the sky at the horizon is paled almost to whiteness. A shimmering appearance at the surface of Bathers at Asnières subtly reinforces this saturating heat and sunlight. Writing about these effects, the art historian Roger Fry reported his view that, “no one could render this enveloping with a more exquisitely tremulous sensibility, a more penetrating observation or more unfailing consistency, than Seurat”.