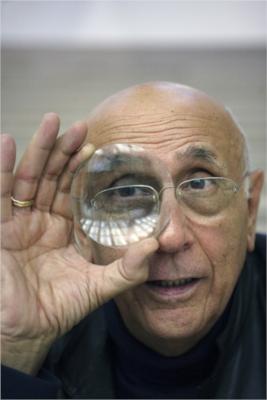 Franco Fontana is an Italian photographer born in Modena, on December, 9th, 1933. He is best known for his abstract colour landscapes. Fontana's photos have been used as album cover art for records produced by the ECM jazz label. He is known as the inventor of the photographic line referred to as concept of line.

Franco Fontana is above all interested in the interplay of colours and he had based his own vibrant and original language on that. The later critics had labeled it as Photographic Trans-avantgarde. He explored different subjects: urban landscape, portraiture, fashion, still-life and the nude. He worked with 35 mm cameras, mostly on location claiming that his studio was the world.

He began working as an amateur photographer in 1961. His first personal exhibitions took place in 1963 in Vienna, in 1965 in Turin and in 1968 in Modena. Since then he has participated in more than 400 exhibitions - collective and personal - and his work is in approximately 60 museum collections all over the world. He has signed numerous advertising campaigns for different brands as Fiat, Volkswagen, Ferrovie dello Stato (National Italian Railways), Snam, Sony, Volvo, Versace, Canon, Kodak, Robe di Kappa, Swissair. He works with magazines as Time, Life, Vogue (USA and France), Venerdì di Repubblica, Panorama, and with the Frankfurter Allgemeine Zeitung and New York Times newspapers.


His works have been published in more than 40 books in various editions and languages and are displayed in many private and public collections all over the world. HIs first book Skyline was published in 1978 in France by Contrejour and in Italy by Punto e Virgola with a text of Helmut Gernsheim.To name a few: MoMA, New York; Museum of Fine Arts, San Francisco; Victoria and Albert Museum, London; Metropolitan Museum, Tokyo; National Gallery, Beijing; Australian National Gallery, Melbourne; GAM, Turin.

Currently he is the art director of the Toscana Fotofestival. Famous international photographers are invited.